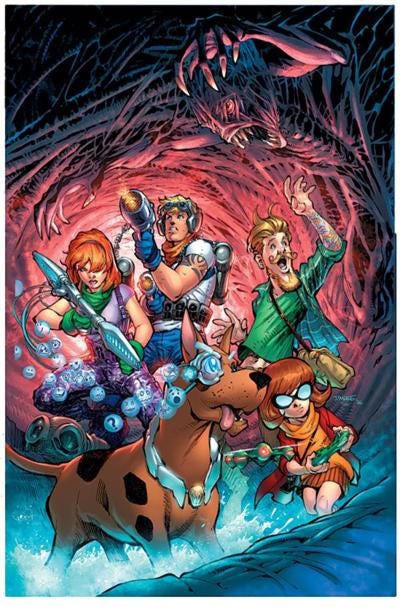 NY Daily News-  The beloved characters of “Scooby-Doo” are getting a completely revamped look in a new cartoon series, “Scooby Apocalypse” — and fans aren’t too happy about it.  In a new photo released by DC Comics, Scooby sports what appears to be a bionic blue eye, while the traditionally well-groomed Fred boasts an enormous black tribal tattoo and wields a laser gun. Daphne, too, flaunts a gun in the photo, and she trades her trademark purple dress for a pair of more combat-appropriate overalls.  But Shaggy undergoes the biggest transformation of all, as the fan-favorite, scruffy looking coward now has a full-on hipster beard, a handlebar mustache, gauge earrings and a sleeve of tattoos on his left arm.

It’s just one of the classic cartoons that DC is overhauling this year. Most notably, the comic giant will also debut a new version of “The Flintstones” featuring far more detailed animation for the prehistoric characters.

I usually hate change when it comes to any TV show or movie from my youth.  But I have to admit that this makeover is pretty decent.  First and foremost, Daphne is still a smoke.  Making one of the sexiest cartoons from back in the day ugly would have been unacceptable.  But Daphne still looks hot and now has the build where it looks like she could compete on MTV: The Challenge.

Fred having a tribal tattoo is perfect since he was the biggest hardo in the world on the old show. No self-respecting preppy dude like Fred would be hanging out with filth like Shaggy. But you could convince me that Fred would hang out with anyone that Daphne told him to.  Speaking of Shaggy, updating him to a modern age dirty hippy was perfect.  Tats everywhere that say he may have been a junkie at one point of his life while looking like he would fit in with the bums begging for tickets outside of a Phish concert was dead on balls accurate (it’s an industry term).

Now I don’t know what the fuck is up with Scooby’s eye, but as long as he drops a few Scooby Dooby Doos and eat some Scooby snacks, it will be fine. And I couldn’t care less about Velma. Just an absolute zero every second she is on the screen. So her not being some frumpy, freckled faced mess is a definite plus. And I am thrilled that there is no Scrappy Doo in sight. Napoleonic Complex out the ass.

As for the Flintstones makeover 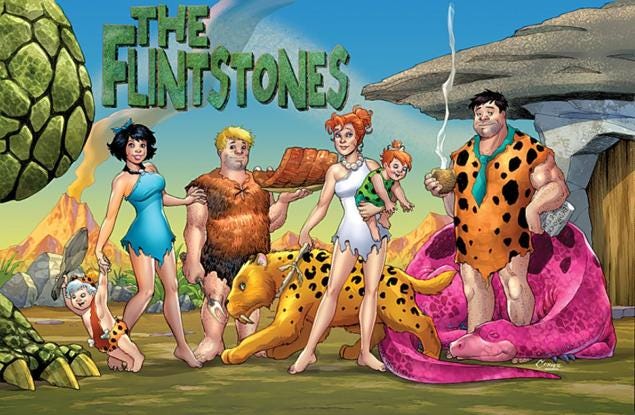 Good for Wilma. She had her lunch eaten by Betty for years.  I mean I would still choose the new Betty over the new Wilma, but if I had a little bit of Ginger Fever going, I could see myself looking to take Wilma into a cave like Jon Snow and Ygritte.  It’s also nice to see Fred finally gets a little bit of respect.  You don’t move around boulders all day without getting at least a little ripped.  And it looks like Barney will settle in nicely as the slob sidekick.  He spoke out of pocket way too many times back in the day for a sidekick.

However, my one gripe is Bam Bam.  I want him to be a comically large baby that looks like he is juicing.  You don’t generate that type of power being slim unless you are Mike Stanton.  And nothing about Barney and Betty’s genes say they could breed a baby Mike Stanton.

I feel like all that’s left is the Jetsons, right? 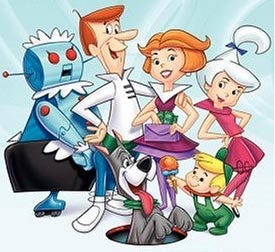