BI - One of the last sports-programming blocks up for grabs, the NFL’s “Thursday Night Football” (“TNF”) package, was gobbled up by CBS and NBC on Monday for a reported $450 million. This is a massive increase over the reported price of just under $300 million CBS paid for the package in 2015. But the deal for “Thursday Night Football” — despite its high ratings and ad revenue — may not actually be worth it, according to Morgan Stanley analyst Benjamin Swinburne.

“We estimate CBS has lost over $200 million from this contract over the last two seasons (direct ad [revenues] less rights fees and production costs),” Swinburne and his team wrote in a note published on Monday before the announcement of the new deal. CBS paid around $37.5 million per game to the NFL under its earlier deal. With the new deal, this comes out to around $45 million a game, which is what Morgan Stanley expected under its new assumptions for losses related to this package in 2016.

“We estimate CBS could take nearly $200 million in losses [from the current ‘TNF’ deal] and (while reducing ad sales) turn them into positive net income,” said the note. “Said differently, for the losses to be equivalent to the new TNF package in 2016, the cost against those revenues would have to be ~$230 million or roughly $9-10 million per hour.” 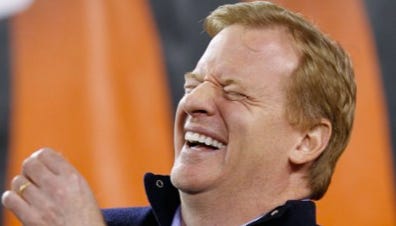 Did I use that picture right? I’m pretty sure I did. Just Goodell doing Goodell things. That’s why this guy’s job is safer than Rogaine stock as long as Portnoy is alive. Goodell has not one, but two major networks splitting Thursday Night Football for a combined loss of over 200 million dollars. Just so they can say they air the NFL. And people think the game is dying? It’s unreal. Every time you hear about player safety this, they can’t recover in time for Thursday Night Football that, just remember Goodell is charging 45 million dollar PER GAME. And not even good games! TNF stinks on ice. The product SUCKS. He’s the only one making money off of it. Players ain’t getting paid more to be on TNF. Fans aren’t getting a better experience or bang for their buck. In fact, it’s worse. Much worse. And then they decided to throw in some ridiculous jersey combinations just to piss off the color blindos and everyone else who just wants to sit down and enjoy a game of football with their eyeballs falling out. But despite all of that, NBC and CBS will both lose over 100 million next season. Goodell truly is something else.