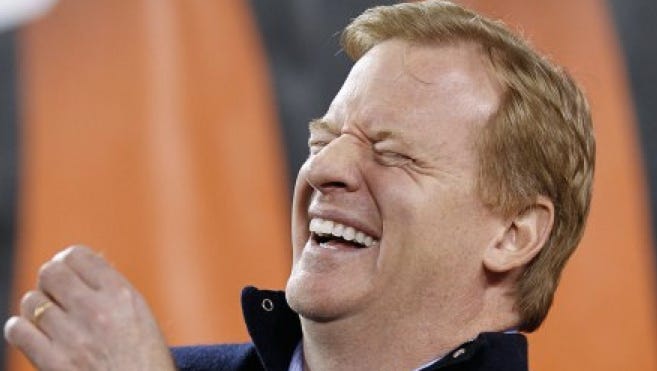 Boy, is this some rich stuff. I don’t know if you recall, but a week ago everyone was reporting that sources at the NFL may release the PSI levels collected throughout the season during Super Bowl week, as if it was some attempt to rattle the cage of the Patriots. Now that it’s Super Bowl week and, unfortunately, the Patriots aren’t there, these numbers don’t exist. They were never collected. It wasn’t a research study to see if they completely fucked up the AFC Championship and besmirched a hero’s good name, it was just spot checks.

The NFL had no reason whatsoever to keep that information and compare it to what happened on January 18, 2015. The night which will cause them to go to court next month and defend a yearlong witch hunt. Why would any of that data be pertinent? What could finding out if balls regularly change pressure when used in different climates possibly tell you? Nothing at all. That’s why the NFL simply checked PSI levels, wrote them down, then put them in a paper shredder like all trustworthy companies do.

You want me to believe that everything’s on the up and up, Roger? Show me. You lost the trust of fans ages ago. If you want the American public to have faith that every ball remained at the exact PSI from kickoff to end of game, let’s see the proof. “It wasn’t a research” study is such a fucking bogus thing to say when that’s exactly what it should have been. You attempted to suspend a guaranteed Hall of Famer for 1/4 of the season over something you knew nothing about. Now that you’ve learned a bit more, why don’t you share with the class? That’s what you’d do if the numbers proved you right, after all. But I’ve got a pretty good idea what the numbers said, as everyone from high school juniors to Nobel Peace Prize winners have told the world that the balls were exactly where they should be. So maybe it’s best to tear all those “spot checks” up and finish relieving yourself on my head and asking, “Quite the storm today, huh?”