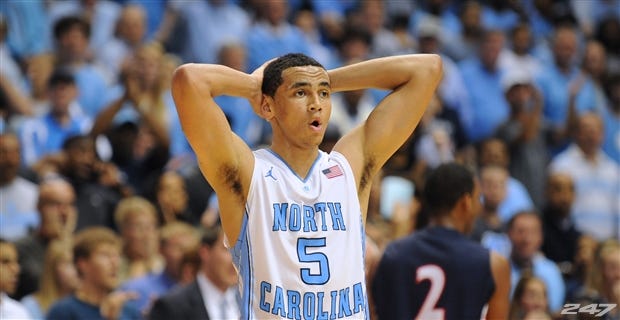 I’m not going to bash UNC for losing on the road to Louisville – something we’re seeing a ton of this year. I won’t bash UNC for that because Louisville desperately needed that win and it’s not like the Cardinals are a bad team.

I will say there are a ton of flaws with North Carolina, most notably from a ‘star’ who really isn’t one. I tweeted this out during the game yesterday. Has there been a more underwhelming performance for someone being named preseason Player of the Year before last season and preseason All-American this year?

Marcus Paige just simply isn’t a star player. He’s not the most important player on the roster and is currently shooting himself and the team into trouble. Paige is averaging 12 points a game and shooting just 32 percent from three. In his last six games he’s scored double digits once (against Boston College) and shooting 10.84 percent from three. That’s not a lie, that’s not an exaggeration. The dude simply can’t shoot the ball right now.

That’s how you beat North Carolina. The Tar Heels are one of the worst three-point shooting teams in the country, ranking 326th in the country. They also can’t defend the 3, giving up 37 percent on the season, which is 292nd in the country. Louisville’s defense showed this last night. They sagged in the lane, taking away the post as much as possible. Brice Johnson still put up his numbers, 15 points and 11 rebounds, but they shot 17 percent from deep.

This just shows there’s no such thing as the ‘by far best team in the country’ as people have said about North Carolina. This team simply can’t succeed without an improvement shooting the ball, especially from their ‘star’ Marcus Paige. For anyone who wants to point out their record, just take a moment to look who they have beat so far. There’s a little bit of Indiana in this team, where they’ve played pretty much the bottom half of the ACC so far.

Speaking of the Louisville/UNC game. How about this pass by Anas Mahmoud? I’m not saying he’s the best Egyptian point center I’ve ever seen. But, I’m not saying it’s wrong either. Looking like a new Vlade Divac out there.

Speaking of Indiana, the Hoosiers have a huge game tonight against Michigan. A lot of people probably don’t realize Michigan is just a game behind first in the Big 10. The most impressive part of this? Michigan is doing it without Caris LeVert and they have the win over Maryland in hand. This is a must-win game for both teams, because of the schedules going forward. Both haven’t had the toughest schedule with Indiana’s toughest game being Wisconsin and Michigan going 1-2 against Maryland, Purdue and Iowa. A story to watch is Max Bielfeldt coming back to Michigan after spending his first four years in Ann Arbor. John Beilein just came out on a radio show saying he wishes the Big 10 didn’t allow Bielfeldt to transfer inside the conference and he’s playing well shooting 44 percent from deep, which helps stretch the floor. Michigan simply isn’t turning the ball over and shooting the ball from behind the arc – typical John Beilein team – ranking in top-10 of both. Indiana has drastically improved defensively since James Blackmon, Jr., suffered a season-ending injury. Give me the home team by 3.

Remember how everyone thought West Virginia had the makings of a top-5 team in the country? Well, they are about to lose back-to-back games for the second time in six games because they have to go to Hilton Coliseum tonight. The biggest thing to watch in this game – as it typically is with West Virginia – is how Iowa State handles the pressure from the Mountaineers. The good news? Iowa State has Monte Morris, who simply doesn’t turn the ball over. The biggest improvement for Iowa State has been their defense and physical play, something that was always a question mark for the Cyclones. This is a tough matchup for West Virginia because of the ability to take care of the ball for Iowa State and the inability to shoot the ball for West Virginia. Expect this game to be played at a fast pace, with West Virginia trying to catch Iowa State sleeping on the defensive side of the ball. Give me Iowa State by 7.

I sat down with former Kentucky player Tod Lanter, who talked about three ridiculous seasons in Lexington, which included the 38-1 year. Want to know what John Calipari is like as Coach Cal and who the most talented teammate he ever had was? Check it out here: