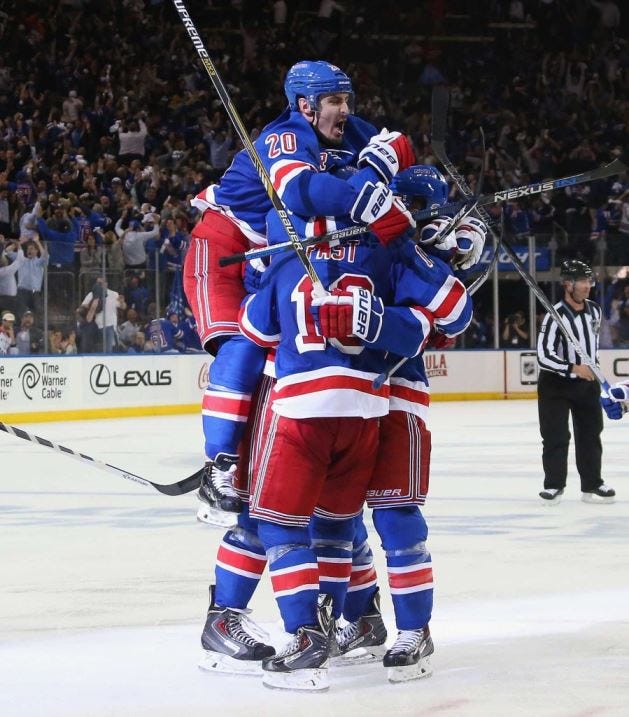 Tonight officially starts the season for the New York Rangers. Of course the first 49 games count just as much as the rest of the slate they’ve got coming up. But just like any other NHL squad with legitimate Cup hopes, it’s all about how you finish & the momentum you’ve got going into the post-season. The Blueshirts started off on fire then took a complete nose dive before leveling out with a 6-4-1 January. They’ve been all over the map & it’s hard to get a read on whether or not this is the team that can finally get over the hump. Most say no – but the fact is NY sits #3 in the East. They’re on pace for 100 points without playing their best hockey. This is essentially their floor. The question is simply whether or not the Rangers can peak over these last 33 games & enter the playoffs primed for their deepest run yet.
Up front, this team looks just fine statistically. They’ve got the third highest-scoring offense in the conference thanks to the balance of 8 forwards over 20 points. There’s still plenty of underlying issues though. For starters, they can’t get away with playing at 75% effort whenever they feel like. Laziness results in the careless stick penalties guys like Nash, Hayes & Lindberg love to take. It results in a lack of back-checking after a turnover & puts an already struggling defensive corps in impossible positions. Considering the balance, I have no problem with Vigneault doubling down on scratching talent for a night or two if they’re not gonna skate all 200 feet of the ice & all 40 second of each shift. A coach can’t play the game but he can certainly control who else doesn’t.
Defensively is where the Rangers look more vulnerable than ever & this is where AV needs to take a more drastic approach. The balanced minutes have to stop because the options on the blue line aren’t nearly as balanced as they used to be. McDonagh & Klein are by far the top two defensemen and simply need to play more than their respective 23 & 20 minutes. Push the captain to 25 & Klein to 22. Maybe not right out of the break but if 8 days off doesn’t magically have Girardi or Staal playing more responsible, disciplined defensive zone minutes then they can no longer be go-to guys in those situations.
Also, if the Blueshirts decide to keep Keith Yandle & treat him like a rental then he needs to be given a crack at more minutes too. With the Yotes, Yandle played more than McDonagh does here. Since coming to Broadway though he’s been turned into more of a specialist. I understand his strength but he’s capable of more than 19 almost exclusively offensive minutes. Either squeeze out every last drop from Yandle over his last couple months in NY or move him at the deadline for the best offer regardless of what it is.
The Rangers have certainly made improvements in their possession game offensively. They’re trying to push towards the net more as opposed to circling the zone aimlessly looking for the perfect play. The chart below shows exactly that – but also shows they still need to tighten up without the puck.

I’m not in the camp of blaming AV for the Rangers struggles this year considering he’s basically coaching the same group in the same system. The players still have to dig a little deeper & bring their games to another level if they plan on being in the mix come the end of spring. There’s an opportunity for Vigneault to put his stamp on this squad though. Raise the bar. Ride the horses that are willing & capable of doing whatever it takes to ensure these Blueshirts are the best version yet while trimming the fat. From the coaches on down, it’s time to realize different results are gonna require a different approach – but the pieces are there to make it happen.

Check out Jordie & I on Chief’s Chip & Chase podcast discussing Wideman (a little late now but we recorded Friday) along with our mid-season award winners & other things hockey before the second half puck drops.