Soooo, over the last week, the biggest live story on the internet has been the “Fine Brothers” Trying to trade mark their popular “react” theme across youtube. This would effectively give them the power to pull down anything they felt directly infringed upon their “intellectual property” i.e anything with the words ____ react to _____ . I wrote a blog about it yesterday, but its void now, so watch one of these next two videos to catch up. First one long, second one short.

So here we are, 7 days after their announcement of attempting to monopolize reaction videos on the internet. 7 days that included, the largest domination of reddit I have ever seen. I saw prolly 30 threads the past two days and youtube suggested was filled with 100s of reaction videos to reaction videos about the reaction video guys (so meta). But im glad that the internet plebs stood up against the tyrants of youtube, they have taken down both of the videos about their “react world” idea and have been officially bullied like the sock head nerds they are. Watching them hemorrhage subscribers on a live stream was also truly inspiring.

Via their “pres release”

A message from the Fine Brothers
Hello,
We’re here to apologize.
We realize we built a system that could easily be used for wrong. We are fixing that. The reality that trademarks like these could be used to theoretically give companies (including ours) the power to police and control online video is a valid concern, and though we can assert our intentions are pure, there’s no way to prove them.
We have decided to do the following:
1. Rescind all of our “React” trademarks and applications.*
2. Discontinue the React World program.
3. Release all past Content ID claims.**
The concerns people have about React World are understandable, and that people see a link between that and our past video takedowns, but those were mistakes from an earlier time. It makes perfect sense for people to distrust our motives here, but we are confident that our actions will speak louder than these words moving forward.
This has been a hard week. Our plan is to keep making great content with the help of our amazing staff. Thank you for your time and for hearing us out.
Sincerely,
Benny and Rafi Fine
*This includes “React,” “Kids React,” “Elders React,” “Lyric Breakdown,” etc. Please note: It takes a while for the databases to update, but the necessary paperwork has been filed.
**Content ID is YouTube’s copyright system that automatically flags content that looks like or sounds like copyrighted content. This mostly flags videos that are direct re-uploads of our videos (which is what the system is built for), but if you know of a video that has been claimed or removed incorrectly, please email us with “false claim” in the subject line.

You would think that people on the internet, would understand the internet climate enough to know there would be such backlash and that this move was going to blow up in their face after people saw right through it as a money grab. Im all for people cutting corners and tricking people into giving them money, but you cant piss on the Internets face and call it rain.

PS im adding these two kids to the “most punchable faces in the world list. Fun fact, I sort of just have this thing, when im drunk, to sort of pluck sock heads hats off of their heads and toss them like nfl flags in crowded bars. oops. 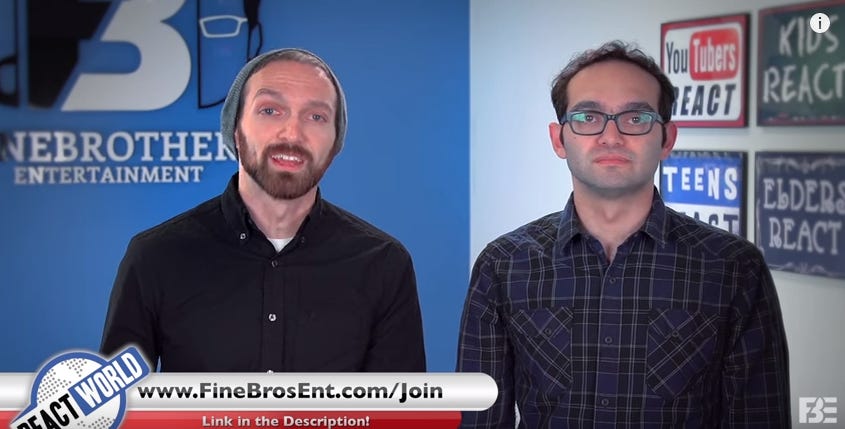 sn – yes i realize they still have a ton of buzzfeed click bait money.