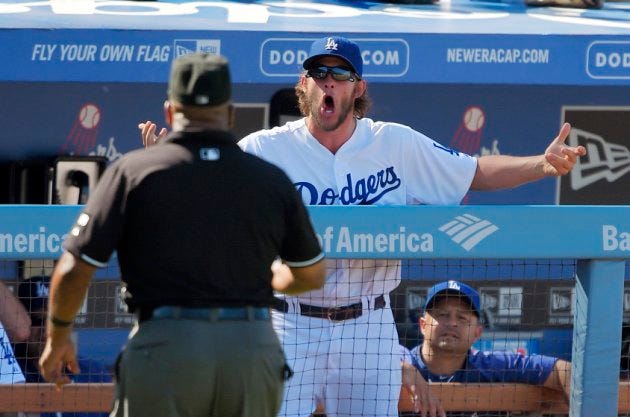 About a week and a half ago, MLB commissioner Rob Manfred said that National League teams might be more receptive to adopting the designated hitter than in years past. Less than a week later, Manfred flip-flopped by saying, “I think the vast majority of clubs in the National League want to stay where they are.”

There was a certain National League superstar who was, surprisingly, enthused about the decision to pump the brakes on the DH coming to the NL. It was the three-time Cy Young Award winner and 2014 National League MVP, Clayton Kershaw.

“It’s just a better game. It really is,” Kershaw said. “Baseball’s a two-sided game. You’ve got to play offense, you’ve got to play defense. I know there’s a lot of great hitters that DH, I’m not trying to take anything away from them, but they all started somewhere. They all played first base, all played a position. They all still could do it if they had to. That’s the truer fun of baseball. Selfishly, I love taking batting practice. Hitting in the game is fun, too. I would miss that part of it for sure.”

Okay, so there’s two major takeaways here. First and foremost, this is where the comparisons between David Price’s and Kershaw’s postseason struggles need to separate. Both are Cy Young Award winners, who have notorious postseason struggles, but it’s clear now that their compete levels are much different. Price, although paid handsomely to do so, chose to stay in the big, bad American League East, whereas Kershaw wants nothing to do with better competition in the National League. I don’t know about you, but I’d want my ace to welcome that kind of challenge, not do cartwheels when he gets to keep an automatic out in the lineups that he faces.

Listen, Clayton, you seem like a nice guy, but nobody wants to see you hit. Nobody cares if you love taking batting practice, and nobody cares if you would miss hitting, because you suck at it. It’s not fun for us to watch you suck at hitting. Kershaw is a career .153 hitter with a .369 OPS. That’s not fun for me. The only people that it’s fun for are the pitchers who get to face you, and, well, you apparently.

It ain’t about you. It’s about the fans. And not that baseball is struggling by any means, as they’re annually setting revenue records now, but when was fan interest at its peak? It was when the steroid guys were crushing baseballs into outer space. We can’t bring back steroids, but we can bring the DH to the National League. Do it.