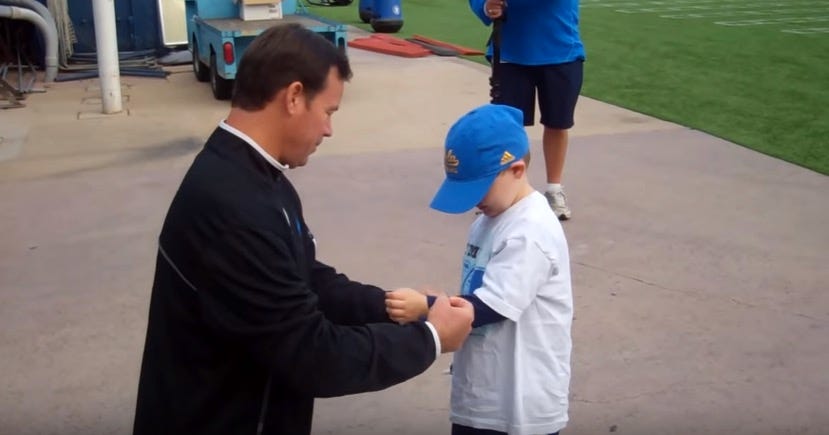 Walk-ons getting surprise scholarships, and sick kids getting a chance to do something awesome with their favorite college teams…the two things that warm this blogger’s cold black dead heart.

When Cade was just five years old, he underwent two surgeries to remove a benign tumor from his brain, but he suffered a stroke after the second surgery which left him paralyzed on his right side and legally blind. Cade persevered, and in 2015 practiced with the Bruins and scored a touchdown on a handoff from quarterback Brett Hundley.

The touchdown run helped Cade earn a spot on the team to play the position of his choice.

“Ever since that practice out coaches and scouts have had their eyes on you and it’s time that we officially sign you to become a University of California, Los Angeles football player…. By accepting this offer from UCLA Football, you are expected to root for the Bruins and train hard! We will be making sure that you are holding up your and of the deal and that you’re UCLA’s biggest supporter.”

In January, Cade’s family announced on Facebook that doctors discovered the small remnant of the tumor left behind from his earlier surgeries is beginning to show activity again.

Can’t wait til Cade beats it, uses his access to the UCLA weight room to get huge over the next 8 years, then actually takes them up on recruiting offer and becomes the Pac-12’s next Christian McCaffery. 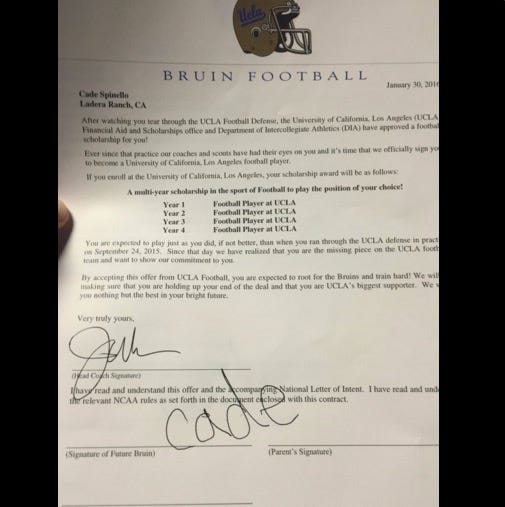