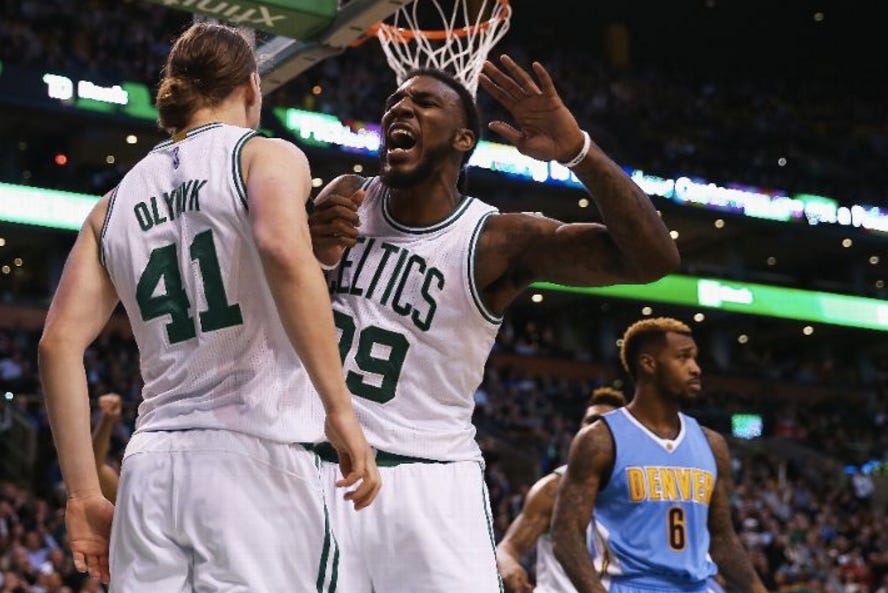 Hard not to love what we are seeing. Welcome back those of you who were done with this team when they lost 4 in a row. Plenty of room for everyone. All the sudden things look completely different, and the Celtics have become one of the hottest teams in the Eastern Conference. Now just 1 game out of the 3 seed with some winnable games on the horizon, it’s becoming harder and harder to hold in the excitement.

How did we get to such a place? Well, we’ve played some pretty bad teams over this 4 game stretch, but when you take a step back and look at the larger picture, the Celtics have reverted back to the type of basketball that got them off to such a good start. I talked about it a little bit on Monday, but the Celtics defense has been spectacular. Now I fully admit, the team as they are constructed may not win the NBA title this year, but that such a lame copout in my mind. What are there like 3 teams in the entire league who can say they’ll probably legitimately win the title? Does that mean we shouldn’t watch anyone else? Does that mean anyone else can’t be good?

If we are looking at this whole thing as a process, as a Celtics fan how could you not be happy? I hear all the time on Felger and Mazz and shit about how they are in the middle of the NBA and aren’t going anywhere. Were people saying that about Chicago? Atlanta? Toronto? Not that I’ve heard. Those were the teams that were considered the competition for Cleveland in the East, and yet, here the Celtics are. Look at the timeline of how they have shifted their franchise, and I urge you to find one team without a big time FA that has had such quick success in getting back to relevancy. It’s as if people forget we got rid of our coach and entire team like 2 years ago. Fast forward to now, with a GREAT coach, good YOUNG talent, this team is knocking on the door to be in the top three in the conference. Maybe stop the complaining just to complain and enjoy this fucking ride.

– We begin with the longest tenured Celtic and the best 1st quarter player in the entire NBA. Absolutely loved everything about Avery’s performance last night. Yeah, the quick start basically set the tone, but it was how they got him his looks that I loved. It will always  confuse me how teams let him get off to these type of starts, since it happens literally every game. After struggling a bit coming back from his calf injury, Avery has really come around from distance the last few games. Last night he lived behind the arc, but I don’t think he took any bad shots, or really forced things too much. 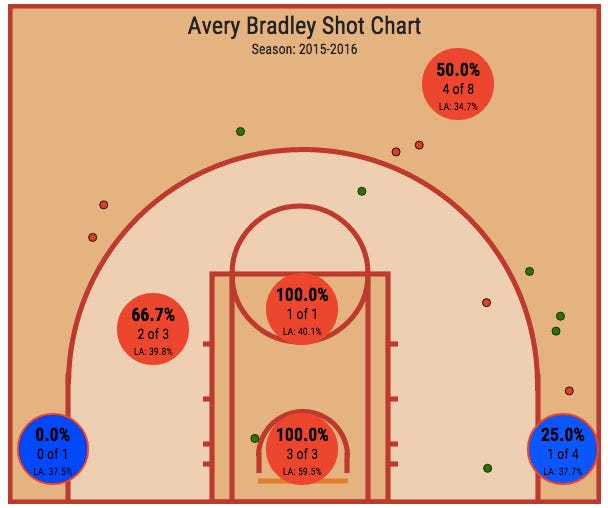 Apart from his shooting performance, which was solid, his defense is what truly won the night for me. His 4 steals led the team, and 99 defensive rating told the story. He was active, he was smart, and he led by example. All things you want from your veteran leader.

– Marcus Smart’s performance reminded me of what my dad used to tell me when I had a game in which I couldn’t make a shot/every game. You don’t have to score to make an impact. At the time what was probably an embarrassed father trying to keep his sons head up, is actually pretty true. Marcus didn’t hit a shot last night, but his fingerprints were all over this win. His defense was stout, he moved the ball, and he didn’t have a turnover. I like how he didn’t get in his own head when he shot didn’t fall, and instead made sure he contributed in a positive way.

– It was also great to see the Celtics didn’t play down to their competition. That’s maybe the biggest problem the 2015-16 Celtics have. Against the elite, they look great. Against the dogshit team, they look pathetic. This was a complete 48 minute effort against a team that on paper isn’t any good. For us to get to where we want to be, efforts like this are required.

– The evolution of Kelly Olynyk is one of the storylines I think I enjoy most this year. He is playing with great confidence these past two weeks, and it’s showing. He is starting to not think about a play and just let the game come to him and he’s killing people. Look, he’ll always be slow. He’ll always be white. But if you cannot see his potential is starting to take form, you are hating simply to hate. How he is shooting the ball from deep absolutely warrants him to be in the 3pt shooting contest (up to 44%), and even though it’s mostly a joke, Dirk-Lite is sorta becoming a thing. What I’ve loved about Kelly’s recent performances is his new found commitment to the glass. For a player who has that soft reputation, it’s good to see him starting to actually use his 7ft.

Oh and his coast to coast bucket as the 3rd quarter expired was nasty. Just a big white ball of goofy comin at you full speed is something these eyes will never get tired of.

– Let’s take a minute to acknowledge the 20 turnovers. For the 4th straight game. I can’t remember the time the Celtics played defense like this. Has to be 10 years or something. The Nuggets coach Mike Malone said it himself. Our wing defense ruined their life. When people ask me why I am still so excited about this Celts team, it’s because they can fucking defend. When they want to. If this team plays defense the way we all know they can, they are really really really tough to beat. I mean shit they only shot 42% last night and this was a 20pt game in the fourth quarter.

– Another strong showing from Evan Turner. His last two games have been a dream scenario. He is playing within himself, isn’t forcing the play and is getting to his sports for a high percentage bucket. Peak Evan Turner at his finest. I hope there are some other GMs watching because you may or may not know this, but he is available.

– I think offensively, we saw a pretty standard effort from the Celts. Their 111 points is nice, their 42$ shooting is as to be expected. Shooting 9-28 from deep isn’t terrible, especially since they took 96 shots in total. They didn’t turn the ball over, just 11 for the game, and moved the ball well with 29 assists on 41 baskets. Basically offensively in my mind, this is all they have to do to win on a consistent basis, and it’s not even that hard to do.

– Hey we are fair around these parts, so unfortunately, Isaiah lives in this section today. Not his best game, based on what we’ve become accustomed to, but not terrible. He didn’t shoot the ball that well, and having a 5:4 assist to turnover ratio is never ideal. No need to panic, just calling it how I see it.

– The Cels really struggled with Gallo. His offensive game make him an interested topic for Celtics fans. Would you trade for him? Theres the feeling that Denver could try and move him on the deadline because they are going nowhere, and I think I would, depending on the price. I think a lineup of him and Olynyk (if they were able to keep him) would be an bsolute nightmare for defenses. He is HUGE, can handle the ball, and I think has the right type of skill set for this team. We’ll see.

– Still too many fouls. 32 FTA for the Nugs last night, and I’ll keep saying it. This is playing with fire.

– Given their history, anytime you see a 22 point lead drop all the way to 8, it makes you a bit nervous. To me, it felt like the Celts stepped off the gas a little bit, and that makes me uneasy. Mostly because that is a bad habit to fall into, and the Celtics are not good enough to play this way. If they get up 20, it needs to be 30. It took something like 6 minutes for their 20 point lead to be cut in half, so that could have been better.

– 2 more DNPs for Young/Hunter. In another blowout. At home. DOES ANYONE KNOW WHAT IS GOING ON?? The more I sit here and try and figure it out the more I’m just like…. 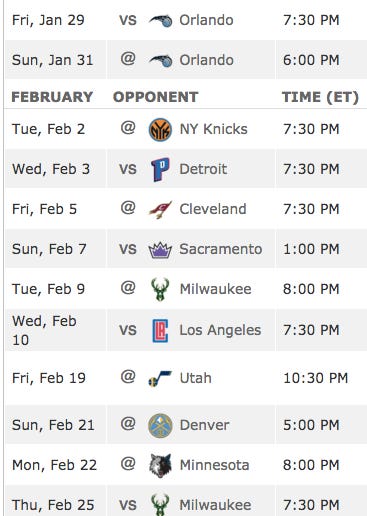 Now be careful, don’t make the mistake and look past any of these teams. We’ve learned our lesson already this season. BUT, there are some very winnable games ahead, and I see no reason why the Celts can’t obtain them. I won’t get crazy and declare them a 2 seed or anything, I still think 47 wins is where they end up. What that means in terms of seeding will obviously depend on how competitive the East is the rest of the way, but it’s time the Celtics start to be included in the conversation when discussing the contending teams in the East. Period.