COLUMBIA Melissa Click, the University of Missouri communications professor who garnered widespread scorn for trying to physically remove a student reporter from a campus protest, was formally charged with assault Monday morning.

A spokeswoman for the Columbia Prosecutor’s Office said Click was being charged with third degree assault, a class C misdemeanor that carries a possible 15-day jail sentence.

Click was caught on video calling for “some muscle” to remove a student reporter from an area on the university’s flagship campus where protesters had gathered. The protests eventually led to the resignation of University of Missouri System President Tim Wolfe and Mizzou Chancellor R. Bown Loftin. Click, however, remains as an assistant professor in the Department of Communications.

I’ll make this blog’s time slot quick because I know everyone is sick of this story at this point. But I made a promise to all of you that I’d see this story through to the end, and I’m nothing if not a man of my word, so just a quick little update here since it’s in the news. Rolling Stone magazine updates and the villains of the Missouri protests, won’t rest until justice is served. You think I’m not sick of looking at and uploading this damn picture? 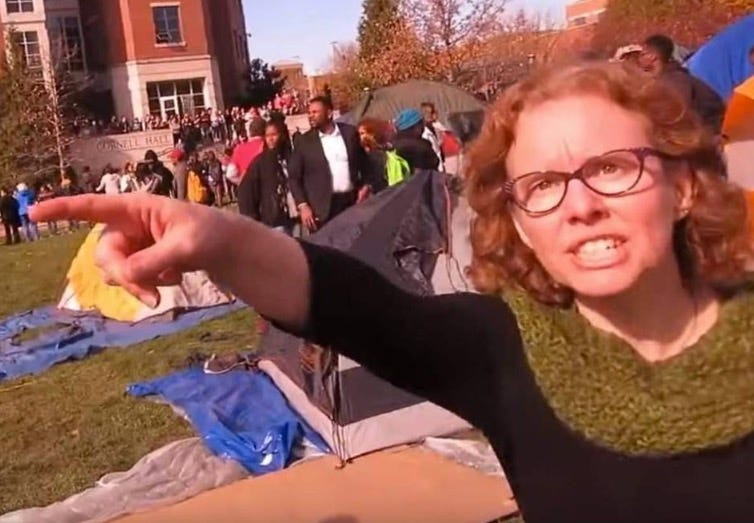 I am, but duty calls.

Last we heard from Melissa Click, 100 House members were calling for her termination. 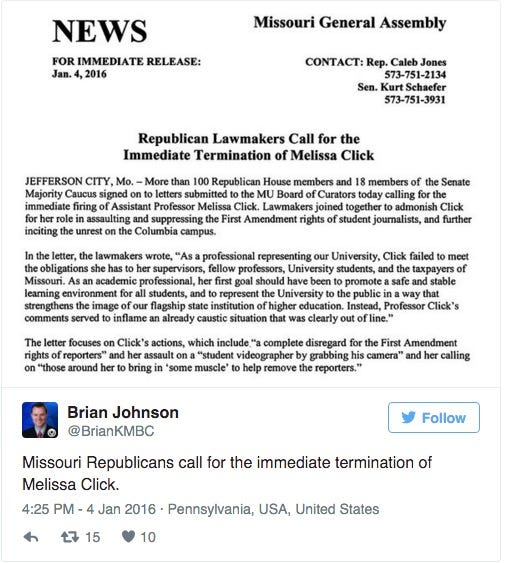 Never a good sign when the politicians get involved. But what else do you expect when the school refuses to do absolutely anything about it on their own? Her punishment was…she resigned…no, not from the school. Not from her job. From her “courtesy appointment” at the Journalism school. She’s still there in her role in the Communications department, cashing paychecks, molding young minds. Unreal. Now at least she’s got some official legal trouble to deal with.

Let’s hope the next move by those House members is to increase the maximum sentence from 15 days to 15 years.