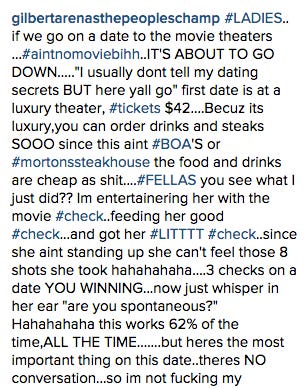 Gilbert is the gift that keeps on giving. You might remember his thoughts on the WNBA, and now he’s giving out advice to get you laid for the low price of $200. And you know, you just know, Gil has pulled this off many a times. The classic “since she aint standing up she can’t feel those 8 shots she took” move is all part of Professor Arenas’ science class. I don’t know if drinking while laying down makes you not feel drunk, but I’m willing to take Gilbert’s word for it. And then the line that drops the panties, “are you spontaneous?” Look, I wouldn’t say I have game. I’d say out of 100 my game hovers around a 15. But jus having read that line alone took me up to a 20. I’m going to use that everywhere now. Chatting at a bar and run out of things to say? “Are you spontaneous?” It’s so simple but also allows you to swing for the fences while being cool as a cucumber. And then just like that you’re getting cheeks in a crowded movie theater.

PS: $200 on a date, you BETTER be getting a handy at minimum. I don’t know how I feel about getting “panties with an audience” though. Is he saying he literally fucks her in the movie theater bed? Gilbert Arenas has zero chill.