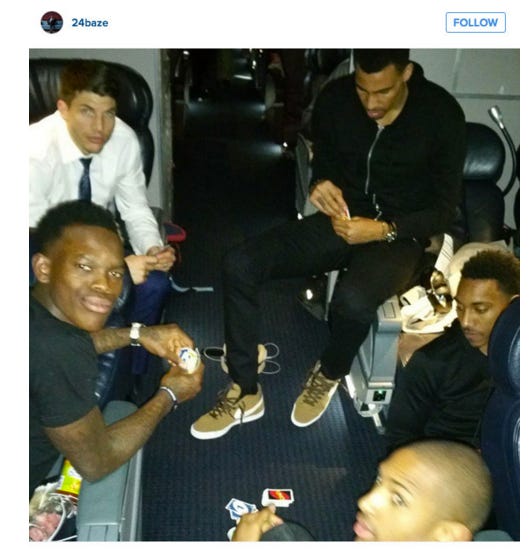 NYT - Lamar Patterson was new to the Atlanta Hawks when he discovered several teammates playing a popular card game at training camp. Patterson asked if he could join them. He thought he knew the rules. “I’m sitting down with these guys for the first time, and I play all the time, you know what I’m saying?” Patterson, a reserve shooting guard, said before a recent game here. “But they were all like, ‘No, see, we play this way, with the Draw 2s and the Draw 4s from the extra decks. We lay the heat.’ And I was like, ‘Wow.’ ”The Hawks were laying the heat — playing Uno, the colorful card game favored by countless schoolchildren and, yes, by a group of millionaires aboard the Hawks’ private plane. “Uno,” forward Kent Bazemore said, “is always a thrill.”

I wrote this blog about poker prop bets and how rich people do ridiculous things for money. And if there is one thing I know about rich people, poker players, gamblers, or professional basketball players, it’s that there has to be money on the line to make ANYTHING interesting. The more days and years that I peel off my life, the more it becomes clear that in every day life, people with money will bet on anything and everything. So if you think for a second this is some sort of friendly game of Uno, you are sadly mistaken.

The conventional objective — first player to get rid of all his cards wins — was enough to keep them interested, but they soon wanted to spice things up. So Bazemore and Schroder hatched the idea of adding some of the more notorious cards from at least two other decks — all the Draw 2s, Wild Draw 4s, Reverses and Skips. The players referred to the extra cards as “heat.” The game was born anew. “I think everyone should play it that way, because it’s no-holds-barred,” Bazemore said. “It’s the W.W.E. of Uno, man. It’s crazy.”

Now, if you haven’t played Uno in a while, it’s not the worst game to play while pregaming. It’s easy yet fun to play and you can work in drinking rules without a problem. Now imagine that on crack, and that’s what the Hawks are doing. Adding in all the draws, wilds, reverses, and skips from 3 other decks…while playing for money, has to be an absolute rush. The Uno swings have to be unreal. One second you’re up 25k in Uno, the next round you’re holding 40 cards and down 40k (assuming they play $1k per card…it’s probably more though). Again, it’s literally impossible they don’t play for money, and call me jaded from the whole Gilbert Arenas gun incident, but this is just setting them up for bad news:

Some of the group’s rules are more complicated than others. If a player is holding the same type of card that was just thrown by an opponent, he can play it out of turn. And depending on the circumstances, a player who throws a Draw 4 card can actually force an opponent to draw eight. To explain other tweaks to the game might require a flowchart. “It’s such a strategized game,” Bazemore said. “You can’t just go up there and play reckless.” In any case, there is often a flurry of late-game action. Bazemore recently had to draw 50 cards after opponents conspired to hit him with a series of Draw 4s. “That was pretty memorable,” Horford said, “just because we’d never seen that happen before.” Horford was the group’s top player last season, he said, so dominant — and his victory total so unapproachable — that the players created a new system in which they compete to 10 wins. Once a champion is crowned, the players’ totals are reset for the next round.

Can you imagine drawing 50 because your teammates were tired of you winning? Just asking for a poop in your shoe, bring a loaded gun into the locker room situation. Now on the plus side it’s hard for two people to collectively be as dumb as Gilbert Arenas and Javaris Crittenton, so hopefully the Hawks understand how to pay their debts and nobody gets got over a game of Uno.