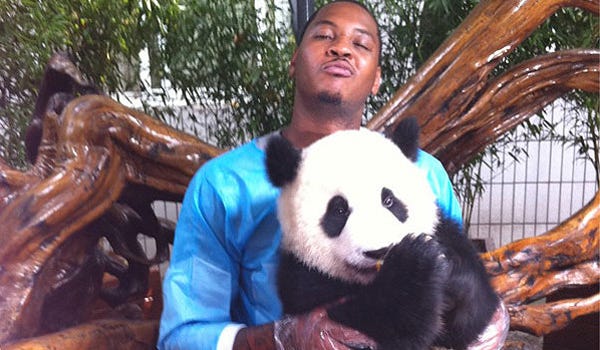 NYDN - Carmelo Anthony has already hit a few jackpots in his lifetime — a gorgeous wife, beautiful son and a $124 million contract, just to name a few. Melo certainly has the Midas touch, so why not try his luck at the biggest lottery jackpot of all time? Anthony, one of the NBA’s wealthiest players, revealed on Monday that he did buy tickets for the Powerball drawing where the prize is in excess of $1 billion. “I don’t think I’m going to ever get hit by an asteroid, I don’t think I’m ever going to be President,” Anthony told reporters on Monday. “I might have a better chance to win Powerball.” With that type of money, Anthony could make a legitimate offer to James Dolan to buy the team. “I’m going to share it all,” Anthony added.

This is it. This is how the Powerball hoopla concludes. Every Powerball winner is usually a hillbilly hick who ends up spending $100 million on oxycontin. I’ve always said the chances of you winning Powerball is inversely proportional to the number of teeth in your head. First thing you gotta do if you want to win is go live in the swamps of Louisiana and develop a drug habit.

Which is exactly why this time around, now that its reached ASTRONOMICAL proportions, Carmelo fucking Anthony will win it. A dude who’s worth $100 mil. And dont get me wrong, when we’re talking over a billion everyone has a right to get in on this shit. Its not like Melo is out there playing the nightly pick 4 with fucking Yolanda Vega. We’re talking $1.3 billi. There shouldnt be a human alive that doesnt throw their hat in the ring. But the backlash if the 4th highest paid player in the NBA wins Powerball will be nothing short of incredible. It will be worse than the backlash Melo gets for being the 4th highest paid player in the first place. Shoot your shot, Melo. 20 times a game or with Powerball. Fuck the haters.