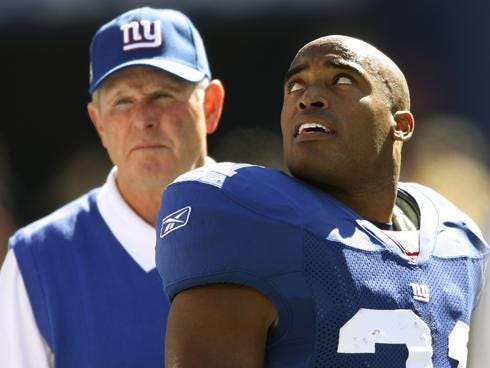 NY Daily News-  Former Giants running back Tiki Barber took to the radio airwaves Tuesday morning to reveal some details about his notorious falling out with Tom Coughlin and his decision to walk away from football in his prime.

In a monologue on his CBS Sports Radio program, Barber shed some light on what made Coughlin so frustrating to work with, calling the coach a “pain in the ass” when it came to his hard-nosed antics.  Barber commended Coughlin for his prowess on the field, but said the coach’s inability to connect with players off the field led to his decision to retire after the 2006 season.

He endured some significant and well-documented fumbling troubles during the middle portion of his abbreviated career, and the running said he was able to fix those issues largely thanks to Coughlin’s incessant coaching.

I figured it was only a matter of time until we got our sound bites from Tiki or Jeremy Shockey.  While it would have been nice for Tiki to simply say “Obviously Coach Coughlin and I didn’t see eye to eye sometimes, but he made me a better player by teaching me not to fumble like an asshole and I saved his ass by running all over the Redskins in the final game of the 2006 season.”  But nope, just more of the same from a guy that should beloved by Giants fans but is instead booed every time he is mentioned at MetLife Stadium.  To be fair, Tiki did acknowledge Coughlin made him a better player and changed his attitude, but in a way that only Tiki can.  Because Tiki is definitely the friend that brings up all the sad and embarrassing stuff that happened when you talk about the good ol’ days in high school or college.  Just a Debbie Downer that used to wear pads.  And I really can’t blame him honestly.  He burnt Eli before the 2007 season, the entire team rallied around their big, dumb, lovable QB, and they won a Super Bowl.  And then Michael Strahan basically got the life that Tiki dreamed of.  If that doesn’t turn you into a bitter SOB, I don’t know what will.

Also, this made me laugh out loud.  The thought of Tom Coughlin’s reaction to Tiki winking at him is the funniest thing I can possibly imagine and I would want to see that video more than the (Fake) Dez Bryant video and the (Potentially Fake) Johnny Manziel video combined.

Barber recounted several frustrating encounters with Coughlin, most notably when he once tried to wink at the coach in the locker room.

“I’m a jovial guy, I smile, I laugh, I say hello to everybody. I winked at him once in the locker room,” Barber said. “The first thing (he did) was he stopped dead in his tracks and said, ‘Don’t wink at me!’ I said, ‘What?? What are talking about? Okay Coach, that’s how you’re gonna be.’”