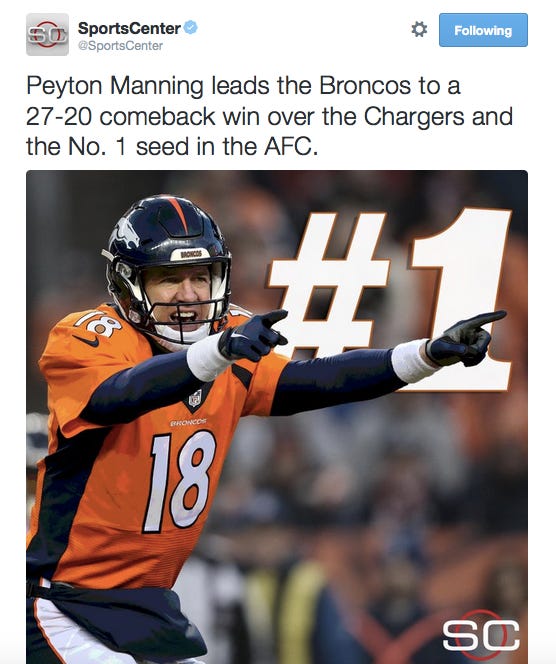 I’m sure I’ll get called a homer, or whatever, but I’m sorry, I can’t sit on my hands here. I’ve spent the last two hours sitting on the couch and wanting to get sick. Peyton Manning came into  that game and it turned into a giant blowjob fest. Jim Nantz and Phil Simms spent an entire half jerking each other off under the booth while saying things like, “The Chargers are going for it on 4th down this early because they don’t believe they can stop Peyton Manning” (Peyton went 5 of 9, for 69 yards) and “Peyton has really rejuvinated this run offense.” I’ve NEVER heard a quarterback get praise for a run game like Peyton just got. It was insane. Meanwhile, not a once was HGH mentioned. Injuries were mentioned, QB controversies were mentioned, HGH mailed to Peyton’s wife while he recovered from neck surgery was not. What planet am I on? When Brady came back this year the over/under on “Deflategate” mentions per game was like five, if I remember correctly. Five. Nantz, Simms, Tracy Wolfson in a postgame interview… none of them even considered mentioning HGH or asking Peyton about it. Honestly everyone involved with that production needs to hand in their media pass and just focus on managing their Manning facebook fan page. Absolutely disgusting.