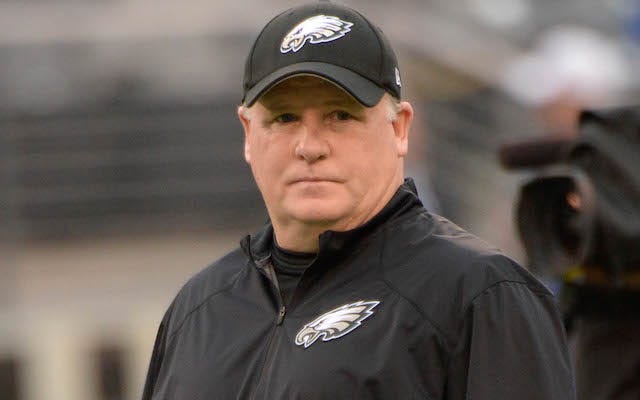 PFT – The Eagles fired Chip Kelly Tuesday night. A short team release announced that team chairman and CEO Jeffrey Lurie had released Kelly. The team announced a Wednesday press conference. Pat Shurmur will be the interim coach for Sunday’s season finale. “We appreciate all the contributions that Chip Kelly made and wish him every success going forward,” Lurie said in the statement

Holy. Shit. His right nut Ed Marynowitz is toast, too. Jeffrey Lurie is washing his hands of the entire situation in one felt swoop.

I honestly don’t believe it. Things must have been either as bad as advertised or Chip simply gave up and wanted his outright release. Or both. I really wanted to give this ride another season, but I obviously don’t know what’s going on behind the scenes. All in all this just fucking sucks and ultimately was a waste of 3 years of football, probably more. We’ll have more as it breaks, but there’s two obvious things:

1) Enjoy your time in College Station or with the Titans making millions, Chip (I swear to shit if he goes to Tenn and wins a title with Mariota I’m going to drive off the Walt Whitman and take as many people I can with me).

B) Whoever the Eagles get better be the right choice. This is a huge fork in the road for this franchise, and they are dangerously close to driving into Browns purgatory territory.

This team will honestly kill my father and I’m afraid the final nail in the coffin will be punched sooner than later.

PS – ONLY COULD A TYPICAL BRAINLESS, DICKLESS, HOPELESS SACK OF MONKEY SHIT PHILADELPHIA SPORTS TEAM DO SOMETHING LIKE THIS ON MY ONLY WEEK OFF OF THE YEAR AND FORCE ME TO DO HONEST WORK FOR THE REST OF THE HOLIDAYS. THIS COULDN’T HAVE WAITED A WEEK?!?! FUCK EVERYTHING.