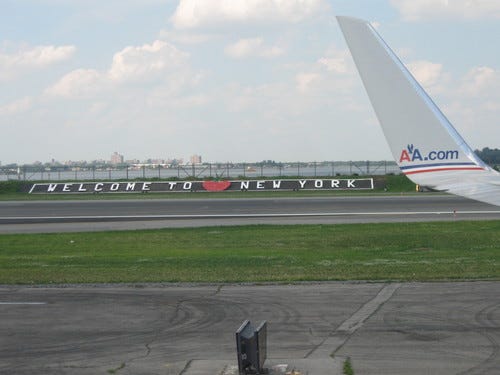 Yahoo! Travel-  The holidays mean a great many things: family, traditions, and the re-airing of your favorite Christmas cartoons. But what turns many of us into Grinches is the fact that the holidays also mean flying to see family, blowing half your Christmas shopping budget on your flight, dealing with a swarm of fellow holiday travelers in crowded airports, long lines, and interminable runway delays. Really, there’s only one guy happy about flying on Christmas, but he’s got eight reindeer, an incredibly cool job, and no airports to deal with.

Picking the right airport to preserve as much of your holiday spirit, and your sanity, is helpful. To wit, the folks at the online trip calculator Travelmath have poured over reams of data from the federal government, crunched the numbers and came up with the best and worst airports in the country.

New York City is a great place to visit. But flying there — not so much. All three of the New York metro area’s main airports ranked among the 10 lowest-scoring airports in the country, with Newark Liberty International hitting rock bottom as the worst airport and LaGuardia coming in second-to-last

New York, New York.  A city so nice, you would rather suck a subway rat’s dick then have to deal with any of the airports to get you away from this place.   Now listen, I understand that dealing with airports is no fun, no matter where you do it.  But I also think that airports attract some of the more frustrated workers in the country.  So when you already have a whole region full of fed up people, hire a bunch of people that probably aren’t working their dream jobs, and then mix them with angry travelers, your result is three airports at the bottom of the barrel.  Just another product of this God foresaken, vermin-filled city.  But I still wouldn’t live anywhere else in the world.  Fucked up, I know.