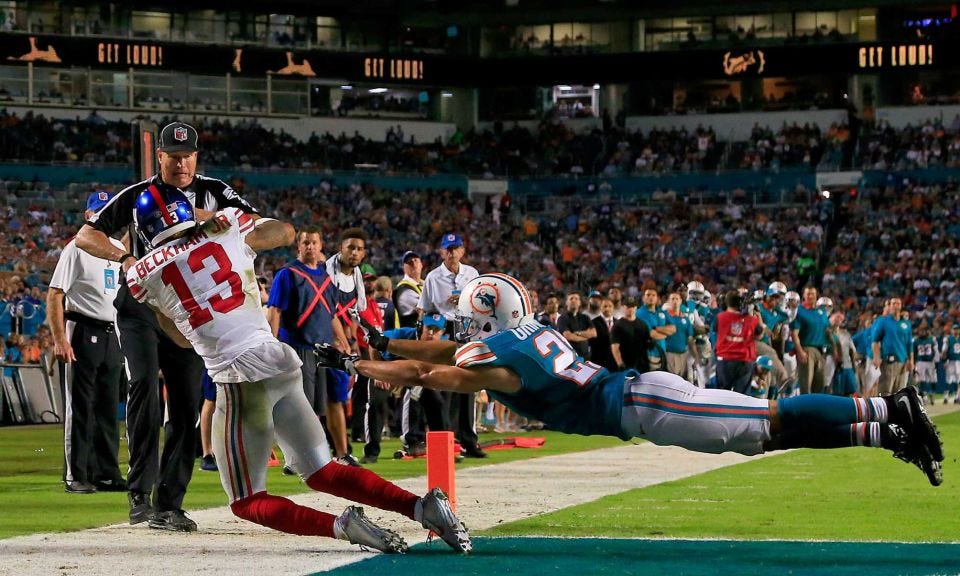 It sure as shit didn’t start pretty. The Giants defense played two-hand touch as Lamar Miller punched in a pair of easy scores & they found themselves down 7 late in the first half. A Will Tye score knotted it right before the break, then it was the Eli & ODB show.
Beckham made his usual prime time highlight reel contribution with a ridiculous toe drag in the end zone to answer a Dolphins third quarter TD.

Then the Miami secondary simply forgot about Beckham and watched him go for the 84-yard game-winner.

The guy is simply unstoppable so I guess the Fins stopped trying. Look at this kid’s game log since November. It’s disgusting.

After a couple clunkers, Eli bounced back in a big way setting a Giants record with his 87% completion rate. 27-31 for 337 & 4 scores was just what his squad needed to put an end to their nightmare run. And don’t forget about Rashad Jennings who grinded out a hard 22 carries. He popped one for 21, moved the chains late and most importantly kept the Giants defense off the field as much as possible. The defensive line stepped up big in the second half & I’m sure keeping them somewhat fresh helped. If we’re not done with Andre Williams at this point then I guess we might as well put him in the Ring of Honor.
So Big Blue keep pace with the Skins & Eagles with the undefeated Panthers coming to town. Philly has a tough matchup of their own against the Cardinals on the way & we’ll all be the biggest Bills fans as they try to keep the Skins W-L-W-L-W-L-W streak intact. Yeah, the Giants will most likely need help but they’ve got the most talented player on any of the three teams & a QB who’s been there and done it before. They ain’t dead yet.