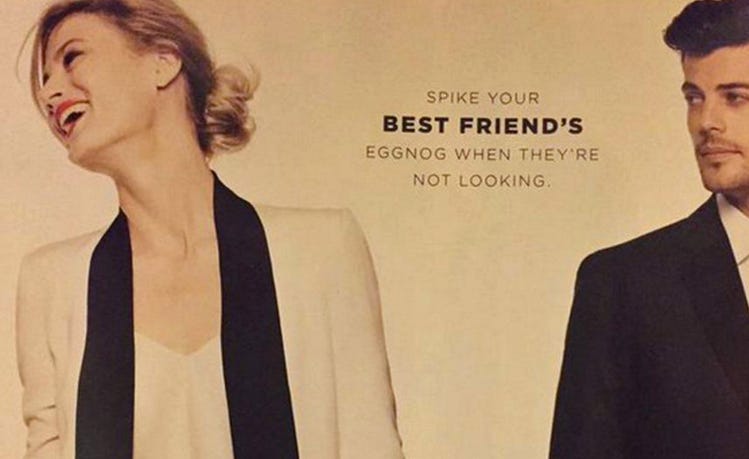 Washington Times - Bloomingdale’s has apologized after many people took to social media to criticize a holiday catalog ad that appeared to promote date rape. “Spike your best friend’s eggnog when they’re not looking,” reads the caption of the ad for Rebecca Minkoff merchandise, which features a female model looking away and laughing as a male model leers at her.  Bloomingdale’s, the luxury department store owned by Macy’s, issued an apology for the ad on Tuesday afternoon. “In reflection of recent feedback, the copy we used in our recent catalog was inappropriate and in poor taste. Bloomingdale’s sincerely apologizes for this error in judgment,” the retailer said.

Legitimately have tears in my eyes. I have no idea how this makes it to print. People overreact about EVERYTHING nowadays. And I’ve been sitting here trying to even imagine how many layers of people this got through when I can’t even think of a way “spike your best friend’s eggnog when they’re not looking” could be perceived as anything but rapey. And the way he’s just looking at her, ready to pounce. My only guess is Bloomingdale’s adheres to the “there’s no such thing as bad publicity” mantra. People haven’t talked this much about Bloomingdale’s since Friends went off the air. And now I might wanna go check out the sale’s rack, maybe pick something up for my mom.

This ad is just so funny. Obviously they mean “put some alcohol in her drink, it’ll be a hoot!”, but even that isn’t that much better. Love their heart though. When everyone else is being PC, Bloomingdale’s goes straight for the “your best chick friend will be more willing to fuck you if she’s drunk” route. Props.