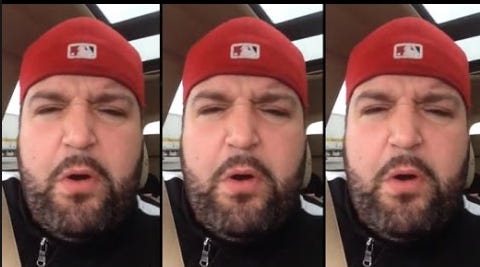 (Source) The frenzy over Starbucks use of generic red cups for the holiday season without a direct ode to Christmas began with a video rant from a self-described “disciple of Jesus” and now the latest hero of the anti-political correctness crowd. But Josh Feuerstein has been at this for years, posting hundreds of videos of himself screaming mini-sermons into his Iphone camera. While he has almost 2 million followers on Facebook, (it’s not clear how many of those became fans after the Starbucks takedown went viral) most people had no idea who Feuerstein was before this week. It’s also unclear whether any notable Christian groups have joined his boycott, and some are vocally opposing it.

Feuerstein has long been on the radar of liberal groups, as the left-leaning Web site Daily Kos, detailed in an article Tuesday. They  first learned of him when he recorded himself calling a Florida bakery to order a cake with the message: “We Do Not Support Gay Marriage.” When the bakery refused to fill the order, he and his followers cried discrimination and harassed the small business until it was forced to temporarily close.

Feuerstein told The Washington Post in an e-mail that he’s preparing a libel suit against the Daily Kos. He was unavailable to comment further at publication time. Feuerstein’s often incendiary views are part of his whole public persona. Appearing on CNN Monday, he says America is a Christian nation because why else would “Obama have to pretend to be one to get elected?” The other guest on the segment, Pete Dominick, a talk radio host, attacked Feuerstein as a “entrepreneurial bigot.”

And would you look at that, the Starbucks red cup controversy wasn’t even a controversy, it was a single internet troll posting a youtube video on facebook and watching as the rest of the world commented on his fake controversy. This is peak garbage internet, it doesn’t get any worse. When one person screams out loud and everyone respects their singular voice and reacts to the reaction. I actually think I hate it more than the fake outrage people. The people who outrage about the fake outrage have somehow become worse. And this is exactly why we need a system in place. Like twitter’s new “moments” we need a new “outrage” button where you can track if real people are actually outraged about something. Your crazy aunt, your racist cousin, the professional twitter troll, and the psycho celebrity (looking at you Rob Lowe) don’t count. Until an actual group of people or real publication gets upset you can’t get upset at the imaginary upset people. Just writing that sentence made my head hurt. The internet in 2015 is basically like the human centipede. All it takes is a single tweet to get the system rolling. People just pooping in each other’s mouth all day long. One single person says something and then people get upset that people are upset and then a real group comes in to defend the first person’s rights to be upset and then there is further backlash from the upset upsetters and we all lose, we all fucking lose.