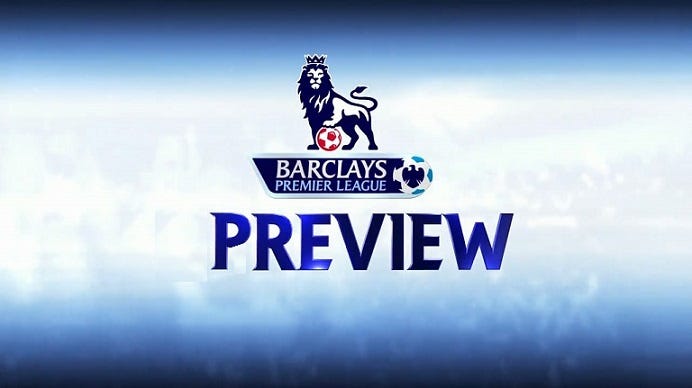 Don’t look now, you guys, but soccer is beginning to successfully wave itself into the fabric of Barstool. First came belittlement. Then came hatred. Next up was resentment. And now we’ve achieved grudging respect. The final two steps – acceptance and appreciation – are soon to follow!

Lots of interesting games on deck this week in Germany, Italy, Spain and even right here in the good old U-S-of-A but really there can only be one “game of the week”, which is known throughout much of the world as the “Where Did Adebayor Suck More?” Dærby on Sunday morning. 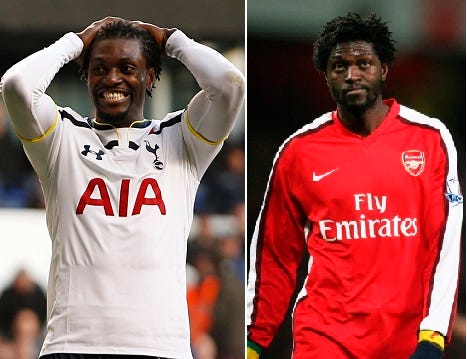 In fact, I’m getting a little too excited just thinking about the game too pinch off a long and protracted intro so let’s instead get right to it… 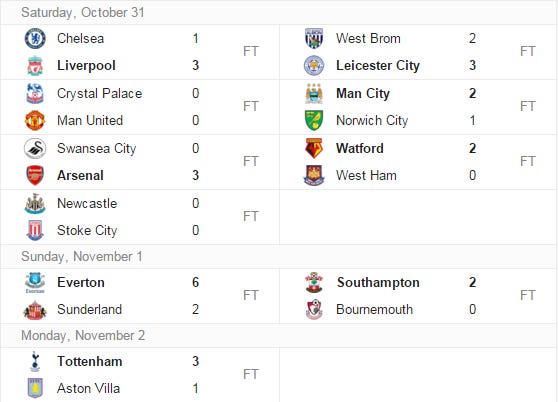 A smattering of news, notes and observations…

– I’ve run out of mean things to say about Chelski at this point. They just stink. The joke may be on us if/when Roman Abramovich sells a couple islands and buys Messi in the January transfer window, but for the time being there are only two certainties in this league: Chelsea will suck a fat one and Lester will concede first then comeback to win.

– Speaking of which, Lester did what Lester does, giving up an early goal to West Brom before scoring the next three. In truth, WBA will feel rather hard done by in this one given that one of the Foxes’ goals was clearly offsides and the referee ignored what likely should have been called a PK for them, but them’s the breaks in soccer sometimes.

– To finish the thought on the Chelsea game, Klopp’s influence on Liverpool is already being felt. Between the game at Stamford Bridge and the midweek Europa League game against Rubin Kazan, the amount of tracking back forwards and midfielders are now (suddenly) doing is like night and day versus just a week or two ago.

– Random factoid of the week: there are FOUR clubs that are currently on unbeaten runs of five games or more: Arsenal, Liverpool, Southampton and Tottenham 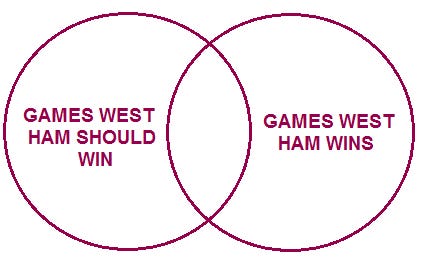 – Unusual home capitulation by Swansea. Tough to tell at this point if that game was a sign of trouble ahead or if Arsenal, when playing well, are just that good.

– United’s offense is broken. (Palace’s ain’t in much better shape.)

– Villa would have a tough time making the MLS playoffs.

– Sunderland would definitely make the MLS playoffs. And lose first round.

So after 11 games that leaves the table looking like this: 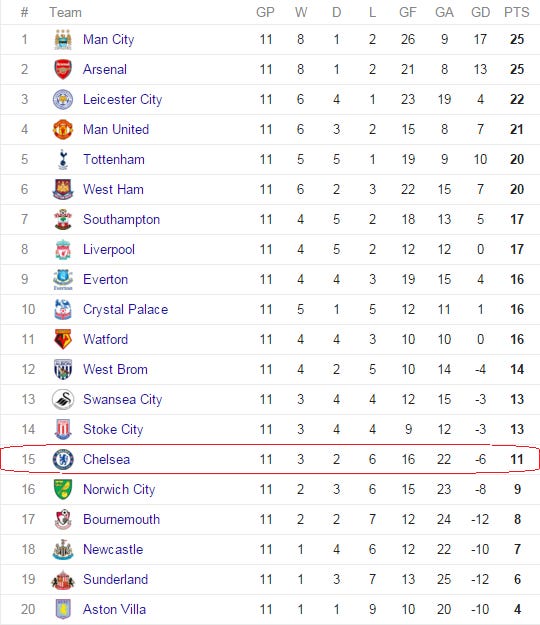 As for the games coming up this weekend, here’s what is on deck… 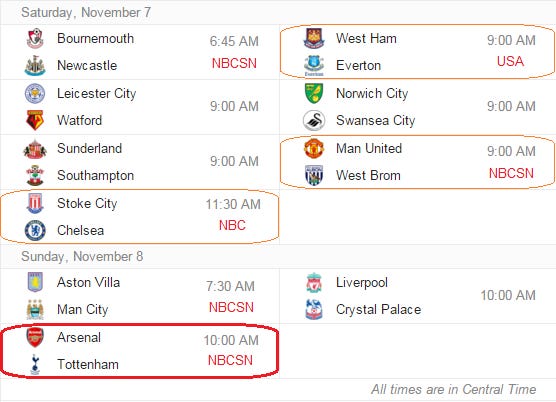 So here are two things that I know for a fact will not happen this weekend: (1) I will not win the lottery and (2) I will not get laid. Why? Because these things are completely dependent upon luck, and I used up my entire allotment of that for the week – perhaps even the year – on Wednesday’s Champions League predictions: 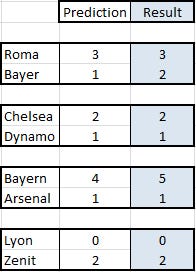 (Note: don’t believe me? I don’t blame you, but here was the post)

Point being, my EPL picks have been about as good as a poop sandwich so far this season, as a friendly stoolie has been kind enough to track in the comments (though you and I should chat, pdidz, as you seem to have “conveniently” missed a couple payouts), whereas the soccer [gambling] gods have been smiling on my Champions League (and even League Cup for god’s sake) picks. I have no explanation for this as it is the opposite of last season and, more importantly, we all know it clearly couldn’t possibly have anything to do with luck. But I do know that you should definitely NOT take any of my advice this weekend based on what happened Wednesday. Now on to the picks…

Ahhhhhhhhhhhhhhh yes, the North London Dærby. Arsenal fans came into last season talking a lotttttttttttt of shit about how they owned the Spurs, etc, etc, only to win a grand total of ZERO of the NLDs. In fact, they haven’t won one during my entire tenure here at Barstool* so you just might say that I am the key to Tottenham’s recent ascendency in this fixture.

Can Spurs keep it up? Let’s look at the facts:

1) Is Harry Kane playing well? I don’t know, I guess it depends if you think five goals in three games is good or not.

3) How many times have Arsenal beaten Sheffield Wednesday this season? Zero, how funny of you to ask.

4) How many injuries are Arsenal carrying? Lots, including knocks to Bellerin, Oxlade-Chamberlain, Walcott, Ramsey and potentially Koscielny (he is questionable at the time this is being written).

5) Has Arsene Wenger learned how to zip a jacket? No. 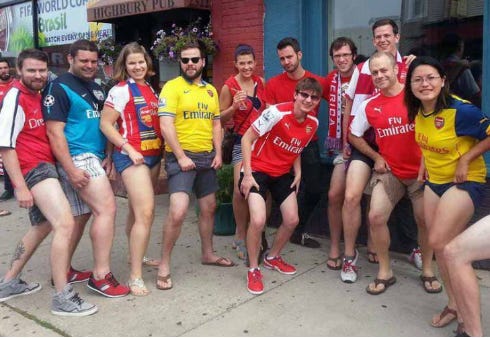 Congrats, too bad you have to go home and live with yourselves the rest of your miserable lives

Real talk: how much poop is in some NBC executive’s pants right now thinking about the fact he or she advocated for putting Chelsea at Stoke in a prime slot on NBC?

So apparently this is a real thing that Jose Mourinho really said:

Which is perhaps the ballsiest thing ol’ boy has ever said considering their recent form looks like this: 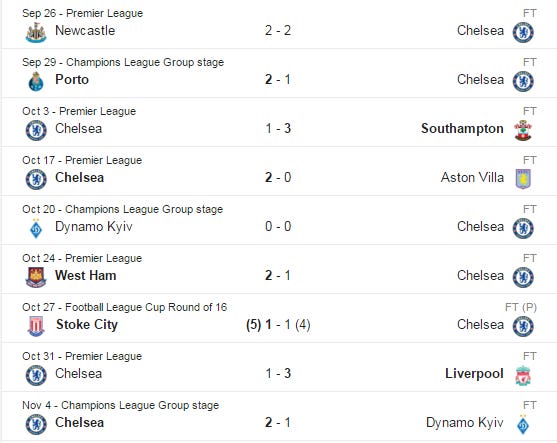 Let’s give him the benefit of the doubt though and assume he was drunk off the success of beating a Ukrainian club at home in highly unconvincing fashion on a goal right at the death for only Chelsea’s second win in months – neither of which have come against EPL opposition, it could be noted.

Bookies having Stoke at damn near +300 tells me that they must hate money. Only explanation. Have you bros watched any soccer this season? Apparently not. Add to that the fact Diego Costa may be struggling with an injury, and Mourinho’s one-game “stadium ban” and this is just becoming silly. Anybody betting on Chelsea at this point must hate watching slow motion, billion dollar train wrecks, which means we probably shouldn’t be friends. Give me a 0-0 draw and some poor NBC executive’s executive assistant’s head on a platter. 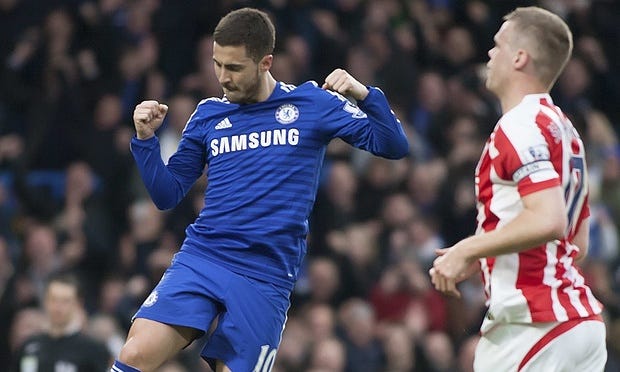 [Note: you are welcome, America, for just ensuring what was inevitably destined to be the most boring 90 minutes of soccer ever played will now undoubtedly be a 6-5 goal-fest capped off by three back-and-forth injury times lead changes.]

Other games: Instead of watching what will very likely be a 1-0 snoozer win for United over West Brom on NBCSN on Saturday morning, be sure you are instead watching the sneaky great matchup between West Ham and Everton over on USA Network. Everton is fresh off hanging a 6-spot on poor Sunderland while West Ham looked like the chunky puke my dog quite literally just expelled all over the floor in front of me. (Wtf were you eating? Wood chips, Fruity Pebbles and… is that corn??) So what can we expect from this game? First and foremost, there should be goals in it – in part because both clubs’ defences are a bit leaky. My guess is the Lukaku-Kone duo will help the Toffees have just enough to get over the hump in this one. Everton to win 3-2.

It happened. Bayern played a domestic game last weekend that it did not end up winning. Pretty shocking, I know. That leaves their record at 10 wins and the 0-0 draw against Eintracht Frankfurt. Will the Bavarian giants actually lose a game this season? Perhaps, though it is unlikely to be this weekend. 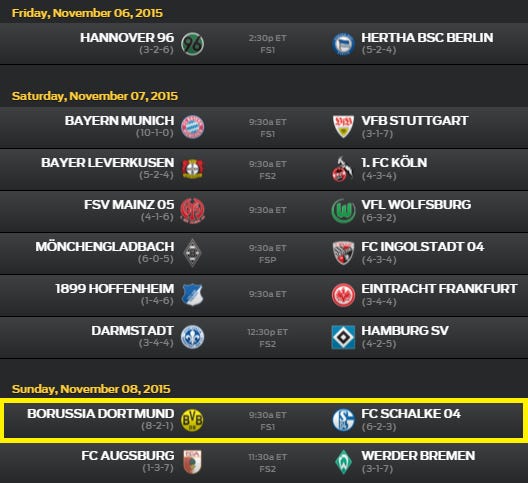 Game of the week for me is on Sunday morning when 4th place Schalke visit 2nd place Dortmund. Golf claps to Fox for being kind enough to show it on FS1.

BEST OF THE REST

LA LIGA: 3rd place Real Madrid travel to 5th place Sevilla on Sunday (1:30pm CT on beIN Sports) in a game that will undoubtedly be overshadowed by other SPORTS being played but will undoubtedly make for a DVR-worthy game. Do it.

SERIE A: Anytime Roma play Lazio (Sunday at 8am CT on beIN Sports) it is worth watching, plain and simple.

MLS: Second legs of the conference semi-finals coming up on Sunday. 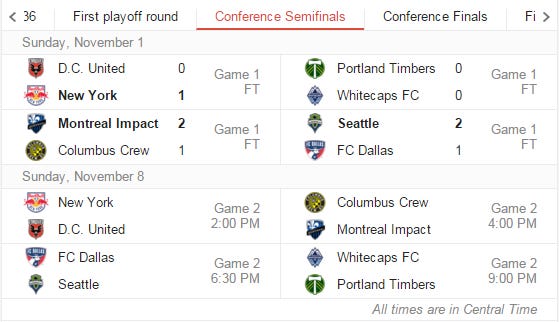 “Hey, I’ve got a great idea! Let’s schedule our entire slate of playoff games so that they conflict with the World Series and America’s most popular sport at the moment, that way we can be sure to attract as few eyeballs as possible for our most important games of the season!” –someone in MLS HQ, apparently.

Yeah, can’t say I understand the rationale on this one but there are some good games on deck this Sunday, (perhaps) highlighted by Seattle (up 2-1) heading to Dallas and Red Bulls heading home (up 1-0) to face DC. 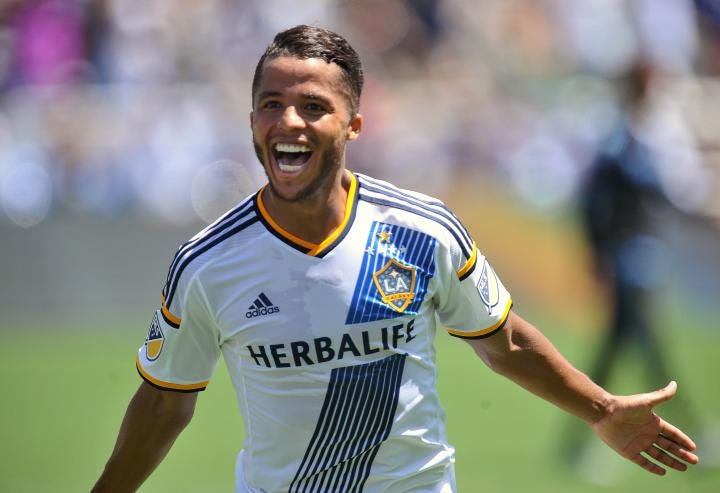 Will be watching from the best seat in his house

So there you have it: the best weekly soccer preview that Barstool will ever publish today. Check ya next week.