As we said last week, playing in Oakland sucks or maybe the Jets just suck at this point. Last Sunday was a disaster scene, when reviewing what happened it was closer to a horror movie than a NFL game film. Anyway, on to your questions for this week. Thanks for sending them in through Twitter! 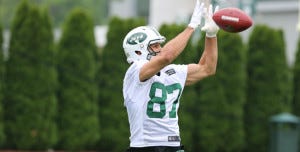 @TurnOnTheJets @BarstoolNewYork @KFCBarstool what do the jets do with the safety position until pryor is back, given how bad williams was

Moving Marcus Williams from corner to safety backfired in the worst way possible, as he missed six tackles and was repeatedly abused in the passing game. The thought was likely that he could bring more range and speed to the position but you already have Marcus Gilchrist for that. Dion Bailey is a limited player but as a spot starter for Calvin Pryor (who is immensely valuable to this defense) he is probably a better option than having Williams deal with a position switch. I’d expect Bailey back in the starting line-up vs. Jacksonville, with Williams potentially spelling Antonio Cromartie from time to time at corner.

@TurnOnTheJets Will the jets bring in more depth to the QB position after injuries to geno and Fitzpatrick? — Dylan (@jetsnation_mut) November 4, 2015

It doesn’t seem like it. The Jets were never going to swing a trade at the deadline for a quarterback despite plenty of unfounded Colin Kaepernick and Matthew Stafford rumors. I’m not sure Fitzpatrick and Geno are as banged up as Todd Bowles made it sound in Monday’s press conference. Both players practiced on Wednesday and the Jets very well may have their standard depth chart on Sunday. If they were to add somebody for emergency depth, it would probably be Matt Flynn who spent a week with the team in the summer and has some familiarity with the offense.

@TurnOnTheJets@BarstoolNewYork@KFCBarstool what is the deal with Leonard Williams? great start but has been off the radar last few games

Williams is a rookie at a low stat line impact position (end in a 3-4). There are many times he is doing effective things that don’t necessarily show up in the stat sheet. However, like many Jets he didn’t have a strong outing versus Oakland and there is understandable frustration that he only has 0.5 sacks through 7 games. I would never expect huge sack numbers from him but a few more impact plays in the coming weeks are needed or he may see a slight decrease in playing time.

@TurnOnTheJets@BarstoolNewYork@KFCBarstool Based on the Jaguars team, what is the Jets safest bet with qbs? Who should start? #Jets — ang (@njbornnysupport) November 4, 2015

As of now it sounds like Fitzpatrick is going to start and regardless of who plays, the Jets need to do everything possible to reestablish their running game. This team isn’t winning many more games if they can’t run the football. I’d expect an extremely run heavy game plan against the Jaguars and a few new wrinkles thrown to hopefully get Chris Ivory back on track.

@TurnOnTheJets Should Jets DL continue to run 4 man front or revert back to 3? Rotate Katt and use Douz at the edge? #Jets

The Jets need to constantly be adapting and tweaking how they get pressure because they have no real threat off the edge. Muhammad Wilkerson will crack 10 sacks this year and Sheldon Richardson will pick up interior pressure but their outside linebackers are Calvin Pace, who was born before the Revolutionary War and Quinton Coples, who isn’t good at football. The Jets blitz packages have came up short the past six quarters so it is time to go back to the drawing board and come up with other creative ways to manufacture a pass rush. Next year? It is time to invest in a true edge rusher.

@TurnOnTheJets@BarstoolNewYork@KFCBarstool how did Wesley Johnson do in blocking and setting up blocking schemes ( I’m guessing not good) — Nathan Harris (@NathanH33334) November 4, 2015

He was OK, considering it was his first NFL start. The bigger problem was Willie Colon who reverted back to last year’s awfulness temporarily, which is likely a byproduct of Nick Mangold not being in the line-up. He needs that Big Beard Support. Similar to how the presence of Brandon Marshall has a positive trickle down impact on the receivers, Mangold’s presence trickles down to benefit the entire offensive line.

@TurnOnTheJets@BarstoolNewYork@KFCBarstool What will be Steven Ridley’s role with the Jets? Thought it was odd he didn’t receive 1 snap. — Anthony Cappuccino (@Anthony_Capp) November 4, 2015

The Jets were fairly abruptly getting blown out so the game script didn’t favor acclimating a new running back. He should see some action this week as Zac Stacy has been dreadful and Bilal Powell has been banged up since week 1. Ridley is the team’s second most talented running back, so the sooner they can acclimate him the better.