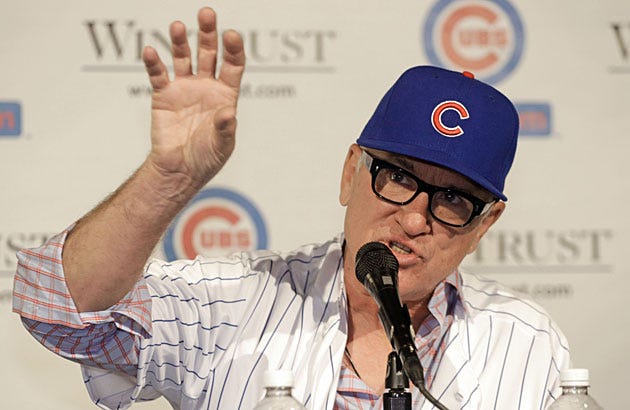 I want to talk about some history, man. – Joe Maddon

Note from 2016: I posted this last year after winning the NLDS. I want to revisit it because I want to add on to this season within the context of just how much has been done to even get to this point.

We’ve got some down time before the NLCS starts because that’s what happens when you win an NLDS 3-1. You get some down time. You get to sleep in your own bed and shit on your own throne and all that good stuff. So to fill the epic hole between now and first pitch Saturday night, I wanted to take a moment to recap how we got here. And what better way to do that than an abbreviated timeline? Answer: there isn’t.

December 29, 1973 - Theo Nathaniel Epstein is born into this beautiful world to parents Leslie and Illene.

1998: Steroids. Lots and lots of steroids. Then a one game playoff with Giants (awesome), more steroids (debatable), and then of course heartbreak/getting absolutely fucking STEAM ROLLED by the Atlanta Braves.

2007: Cubs sign proverbial albatross Alfonso Soriano. Cubs also sign a 16-year old Dominican infielder named Starlin Castro. Lou Pinella takes over. Ryan Theriot and Mike Fontenot combine for 857 plate appearances. (I wish you could see my face as I typed that sentence. Pure and utter disgust.) Carlos Marmol posts a 325 ERA+ and 12.5 K/9 rate while finishing 26th in MVP voting. (Yes, that actually happened.) Cubs win division, then promptly get swept by the Diamondbacks in the NLDS before anyone actually realized the playoffs had started. Also of note, Rich Hill pitched game 3 of that series, and that really bothered me because (a) Rich Hill sucks (2) it was an elimination game and (d) Rich Hill really sucks.

2008: Some more of the above mixed with the resurgence of Kerry Wood, a surplus of Fukudome shirseys,  trading away 1st round pick Josh Donaldson, and a little surprise Jim Edmonds side salad to close out another division title. History would then repeat itself with a first round sweep at the hands of the Los Angeles Dodgers and – more specifically – the left hand of Manny Ramirez.

2010: Tom Gorzelany, Carlos Silva, Casey Coleman and Randy Wells combine for 84 starts. Starlin Castro hits .300 as a 20 year-old everyday shortstop. And everyone gets another year older while the Cubs finish 12 games under .500 despite going 32-49 in June, July and August. On the player development side of things, the Cubs draft Hayden Simpson 16th overall. He would go an astounding 5-17 with a 6.48 ERA over two seasons before getting released while recovering top prospect Josh Vitters hit a robust .247 with 10 homeruns across 3 minor league stops.

September 2011: Red Sox choke away a 9 game wild card lead by going 6-18 over their last 24 games. Some guys got hammered and ate chicken during games apparently. All hell breaks lose, and Theo wants out of Boston.

October 2011: Cubs send cash and prospects to Red Sox for Theo Epstein and make him president. Theo immediately hires Jed Hoyer as the GM and Jason McLeod to run the scouting department.

2012: Cubs sign Starlin Castro to an 8-year/$60 million deal. Cubs then trade 2009 1st round draft pick Andrew Cashner to the San Diego Padres for minor league first baseman Anthony Rizzo. Dale Sveum is named manager. Cubs also trade Ryan Dempster to Texas Rangers for 3rd baseman prospect and right handed pitcher Kyle Hendricks. Dale Sveum leads team to a 61-101 record. Offense manages to come in dead last in nearly every major statistical category while the pitching staff finishes just a half stroke over par with a 4.52 ERA. Jeff Samardzija and Matt Garza make up the most naturally unlikeable 1-2 punch in baseball, and Joe Mather hits .209 over 103 games. Which reminds me: there’s a VERY good chance this is the first time you’ve thought about Joe Mather since 2012. And for good reason – that was a very forgettable season. Like easily the worst one I’ve ever witnessed. Some misery is deflected by the signing of raw Cuban outfielder Jorge Soler and Anthony Rizzo hitting .285 after getting called up in July. These events coupled with Starlin Castro’s brilliance provide a beacon of hope that the future holds better times. Elsewhere, attendance drops for the 5th consecutive year.

2013: Castro sets your dreams on fire, then pisses all over your flaming dreams by hitting .245 with a .287 OBP. Cubs extend Anthony Rizzo on a 7-year deal worth $41 million. Cubs also sign Scott Feldman to a 1-year deal for $6 million. Feldman is then traded, along with 2006 7th rounder Steve Clevenger, to the Baltimore Orioles for Jake Arrieta and Pedro Strop. Feldman posts a 5-6 record with a 4.27 ERA over 17 starts for the Orioles, helping them finish just 7 games away from a wildcard spot. Cubs also trade Matt Garza to the Texas Rangers for CJ Edwards and Justin Grimm. Dale Sveum steers the squad to dead last yet again while Dioner Navarro paces team with a 134 OPS+. Carlos Marmol gets designated for assignment in late August to make way for emerging 35 year-old buzzsaw reliever Kevin Gregg. Soriano’s contract is sacrificed to the Yankees – awww isn’t that cute! - while attendance drops yet again to a 20 year low. Chicago Mayor Rahm Emmanuel blames it on “climate change” and “stuff like that.” Dale Sveum gets fired.

2014: Cubs do not extend Jeff Samardzija after he turns down a 5-year/$85 million deal. Samardizja proceeds to fucking DEAL in the first half. The Cubs then trade him and Jason Hammel to the A’s for Addison Russell (#3 prospect in baseball) and Billy McKinley. Jake Arrieta emerges as a legitimate frontline starting pitcher. Cubs draft Kyle Schwarber 4th overall despite him being projected to go late in the first round. Cubs say he has best bat in draft while Schwarber crushes minor league pitching. Kyle Hendricks posts a 2.46 ERA in his first taste of the bigs. Rick Renteria appears to kinda sorta reach Starlin. Javy hits .169 while slamming some fucking MISSILES in the process. Kris Byrant wins every single Minor League Player Of The Year award.

October 2014: Joe Maddon opts out of his contract with the Rays and then signs with Cubs. Press conference is held at Cubby Bear. Joe buys everyone a shot.

2015: Cubs win 97 games but magically finish 3rd in the division. Cubs proceed to win a road wild card game against the Pittsburgh Pirates via Jake Arrieta shutout and Kyle Schwarber ding dong. The Cubs then beat the division champion st louis cardinals 3-1 in the NLDS, propelling them to the NLCS against Mets. The Cubs get swept in the NLCS in relatively easy fashion, finishing the year much further into the season than anyone imagined including themselves.  Kyle Schwarber clubs 16 home runs in his first major taste of big league action, justifying his selection 4th overall in the 2014 draft. He also sent several playoff baseballs into orbit on his way to practical overnight-sensation status. Anthony Rizzo goes to another All Star game while finishing 4th in MVP voting for his .899 OPS and 6.2 WAR. Jake Arrieta wins the Cy Young award after going 22-6 with a 1.77 ERA and 236 strikeouts over 229 innings while surrendering a league leading 5.9 hits per 9 innings. Kris Bryant emerges from minor service time disputes to unanimously win Rookie of the Year while finishing 11th in MVP voting. KB hits .275/.369/.488 with 26 yabos and a 5.9 WAR over 151 games… all at the ripe age of 23. Chris Denorfia plays in 103 games without missing a cutoff man or making a baserunning mistake while Javy Baez shows us he has more to offer than 2014’s .169 batting average. Edwin Jackson finally gets released opening up a spot for Trevor Cahill to prove that there is a place for extremely thin and underdeveloped mustaches in major league bullpens. Later, Addison Russell displaces Starlin Castro as the every day shortstop, which upgrades the defense substantially. Castro bounces back with a .369 batting average and 5 of his 11 homeruns in September and October. Kyle Hendricks emerges as a serviceable starting pitcher while Jon Lester validates his massive fucking contract. Rondon, Strop and Grimm lead an above average bullpen straight off the island of misfit toys while Joe Maddon proves to everyone that yes, having a good manager does in fact matter. (My apologies, White Sox fans.) The team finishes with the best second half record in baseball while turning the city into a proverbial zoo. Insert Harambe joke.

2016 Offseason: Cubs trade Starlin Castro to the Yankees for Adam Warren while signing veteran free agents John Lackey and Ben Zobrist to sizable short-term contracts. Cubs then dominate most of the offseason headlines by adding Jason Heyward’s stellar defense for a whopping $184,000,000 spread out over 8 years. There’s major hesitancy across the media over the Cubs granting Heyward player options in the contract for years 4 and 5. Everyone wonders if that will hurt the Cubs for all the wrong reasons. Joe Maddon increases his enlightenment while Anthony Rizzo presumably taught himself how to play the piano and run the dishwasher. Dexter Fowler shows up to spring training on a one year deal after reportedly accepting a 3 year contract with the Baltimore Orioles. In the process – the entire offseason process – Theo proves yet again that he is baseball’s ultimate mastermind.

2016 Season: Cubs win the division by 17.5 games over the st louis cardinals. Kris Bryant and Anthony Rizzo become front runners in MVP conversations while Kyle Hendricks (yes, seriously) and Jon Lester do the same for the Cy Young. Kyle Schwarber breaks and tears everything in his knee. Javy Baez guarantees he will never pay for another meal north of Madison again with spectacularly electric play. And David Ross captivates the city in extremely very similar fashion, just for completely different reasons. Jake Arrieta makes his first All Star game while leading the MLB in hits surrendered per nine innings yet again. The Cubs trade Adam Warren back to the Yankees except this time they get blue chip closer, Aroldis Chapman and the rights to his 103 mph fastballs. The starting rotation at the beginning of the year makes 94% of the team’s starts en route to leading the NL in wins, ERA, hits allowed and total runs allowed. John Lackey and Ben Zobrist live up to their contracts while the Cubs start their infield in the All Star game. Kris Bryant accepts a suspect sponsorship opportunity with Express while Jason Heyward removes any hint of marketability by becoming the worst offensive player in major league baseball without much discussion or argument. Alternatively, Wilson Contreras emerges from the depths of Des Moines, Iowa to hit .282/.357/.488 over 252 at-bats in his rookie year at age 24. For all intents and purposes, Wilson Contreras appears to be a future All Star – giving the Cubs a total of 6 potential perennial All Stars under the age of 30 for the next few seasons: Rizzo, Bryant, Russell, Contreras, Baez, Schwarber. Joe Maddon is again, the most intuitive and emotionally intelligent manager in professional baseball. The Cubs lead baseball in OBP, every advanced defensive metric in the machines and a run differential that says they should have won 107 games – not 103 – by way of the pythagorean W-L calculation. And yes, that means the 2016 Cubs can be considered “unlucky.”

2016 Postseason: Regardless of pythagoreon luck, the Cubs march through Madison Bumgarner’s San Francisco Giants in the NLDS 3-1 via comebacks, comebacks, and more comebacks. Then the Cubs dismantle Clayton Kershaw’s Los Angeles Dodgers in the NLCS 4-2 by way of knockout in game 4 that coincidentally started with a lead-off bunt single from a clean up hitter. Following that bunt single, the Cubs outscore the Dodgers 23-6 over the last 23 innings of the series and, in the process, remind everyone that they are the best team in the NL for good reason. Also worth noting that part of this 23-6 surge included a game 6 Kershaw beatdown where the Dodgers sent exactly 27 hitters to the plate without one of them reaching second base. As a result, the Cubs head to their first World Series since 1945 ultimately providing its fanbase with the hardest, stiffest and most authoritative live-ball era boners in baseball history.