Back with another edition of our New York Jets mailbag, as the team comes out of their bye week with a seemingly manageable four game stretch in front of them. (Please don’t crap the bed at home again versus an average NFC East team this week). Thanks for sending this week’s questions in on Twitter, keep tweeting them and I’ll keep answering them here every Wednesday. Let’s get to it… 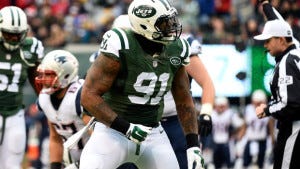 @TurnOnTheJets@barstoolsports@KFCBarstool will the Jets grab a wild card spot this year?

Instead of giving you the standard wishy washy answer, I’m just going to go out and say yes. This is due to a combination of three things: the Jets being better so far than we expected, the AFC being a mediocre dumpster fire and their upcoming schedule for the final 12 games. The Jets have enough talent on defense and at the offensive skill positions to navigate a 7-5 record out of the rest of their schedule (look at the quarterbacks they are playing) and 10-6 looks like it will be more than enough to get in for the AFC. If we are really being fair, the AFC South doesn’t deserve a playoff team and the AFC West basically feels dead already outside of Denver. So feel free to toss this link back in my face come January but the Jets are making the playoffs.

Ridley is due back after week 6 and Milliner is due back after week 8. This is a toss up but I will go with Ridley, although I do think both will contribute at some point. Chris Ivory and Bilal Powell have already both been banged up this season and it isn’t crazy to think other nagging injuries will impact them with how reliant the Jets are on their running game. If healthy, Ridley can be a competent lead back for a week or two, or even just contribute 8-10 carries per week. Milliner has plenty of talent and potential but it will not be easy to find reps behind Darrelle Revis, Antonio Cromartie, Buster Skrine and Marcus Williams. However, he could be situationally used in dime looks and to match-up with certain tight ends.

@TurnOnTheJets@KFCBarstool@barstoolsports Is it too soon to think about qb’s in the draft? Possibly trading Mo for an early draft pick?

Yes it is too soon, enjoy football during the few months it is on and don’t stress out about the long term quarterback situation which has no easy answer in sight.  We have no idea how the top of the first round could shake out yet. Remember at this time of the year a few years ago ago, Jets fans talked about tanking or trading up for Geno Smith or Matt ‘freakin Barkley in the top five or even before that wanted to do the same for Mark Sanchez. Let’s see where the draft pick lands and if there is any movement on the Wilkerson negotiations, as he continues to rack up sacks.

So far Todd Bowles has played Wilkerson 234 snaps, Leonard Williams 215 snaps, Damon Harrison 130 snaps and Leger Douzable 111 snaps. You would guess that the Jets will continue to regularly use four defensive linemen looks and that overall Douzable will see a big decrease and Williams will see a slight decrease. Remember this, if Sheldon Richardson is healthy and in shape, you can argue he is the most talented player on the roster and yes I’m aware how good Darrelle Revis, Mo Wilkerson and Brandon Marshall are. Richardson is a savage on the field when he is on top of his game, Bowles will get him out there.

@TurnOnTheJets Do you think the #jets will show any interest for signing Vernon Davis?

Nah. Davis has been in serious decline the past two years and the Jets aren’t taking on his price tag in an offense that doesn’t utilize the tight end. It is clear the Jets are weak at the position but all the Jets want from their tight ends is blocking. There are limited targets left in a run happy offense after Marshall, Decker and to a lesser extent Devin Smith.

What are your thoughts on Calvin Pryor beginning to show flashes of deserving to be a first round pick?@TurnOnTheJets

Happy thoughts. Pryor was asked to do things he struggled with in college last season, like regularly be the team’s one high safety and didn’t get to attack down hill enough. Beyond that, he was playing with subpar corners and seemed to lose confidence in the middle of the season after being benched. Pryor is now being used more to his skill set, has the support of top tier corners and is playing with a ton of confidence. Safety was an expected weak spot for the Jets this year but that hasn’t been the case.

@TurnOnTheJets why do Jets fans act like there’s a superstar sitting on the bench and a QB change should be made?

There certainly isn’t a superstar sitting on the bench but there is a reason that Chan Gailey and Mike Maccagnan, two guys who know Ryan Fitzpatrick pretty damn well decided to make Geno Smith the unquestioned starting quarterback this spring and summer. Smith got himself foolishly involved in a $600 scuffle with IK “Catfish” Enemkpali and lost his job from it. Fitzpatrick has been the same up and down, average quarterback he’s been his entire career so far but that has been enough for the Jets to be 3-1. He hasn’t lost his job yet and Bowles is unlikely to make a change as long as the Jets keep winning more than they are losing.

Basically, Jets fans remain intrigued by Smith’s physical potential and how he would play when throwing to Marshall instead of Stephen Hill and Clyde Gates. Fitzpatrick isn’t the long term answer but there is a small percent chance that Smith could be, which drives the interest in seeing him play. For now, it doesn’t seem like Fitzpatrick is leaving the line-up any time so just enjoy the FitzCoaster and be happy the Jets have won nearly as many games in 5 weeks than they did all of last season.