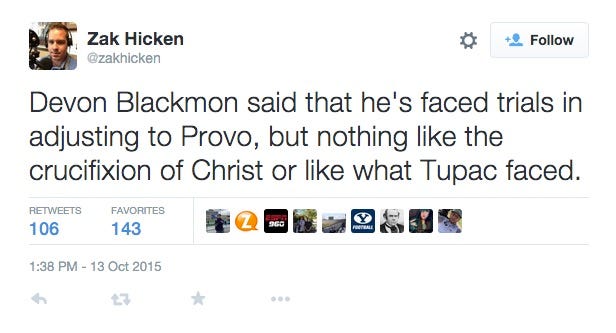 SL Trib – You never know what you are going to get from BYU senior receiver Devon Blackmon — on or off the field — but it is almost always entertaining.

Blackmon, from Fontana, Calif., came up to the media interview room after practice on Tuesday to discuss his career performance against East Carolina on Saturday — nine catches for 132 yards — and ended up making a statement that has caused quite the uproar on Twitter after I and several other reporters posted it around noon.

When I asked Blackmon in a group interview that was lighthearted and playful in nature about his “trials” and his “journey” and how he is doing off the field as a non-LDS, African American in Provo, he said he could not compare his personal struggles and difficulties to the trials faced by Jesus Christ and Tupac, a deceased American rapper who was fatally shot in a drive-by shooting in Las Vegas in 1996.
…

Hmmm, trying to think of who had it tougher? I mean Jesus is Jesus, we all know the story there. Sold out by his boy, beaten by the Romans – whips, crown of thorns, nailed to a cross and left to die a slow agonizing painful death. BUT he was able to resurrect and come back from the dead, which is pretty sweet for him. Tupac didn’t have that luxury. 5 bullets, 6 days of life support and boom, that was it. Unless of course you don’t believe he ever died in the first place and is living off album royalties on an island somewhere, in which case he really didn’t have it that bad at all. I dunno, just something to think about. 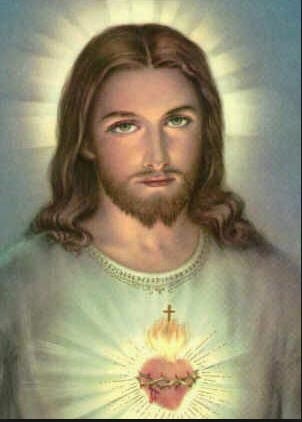 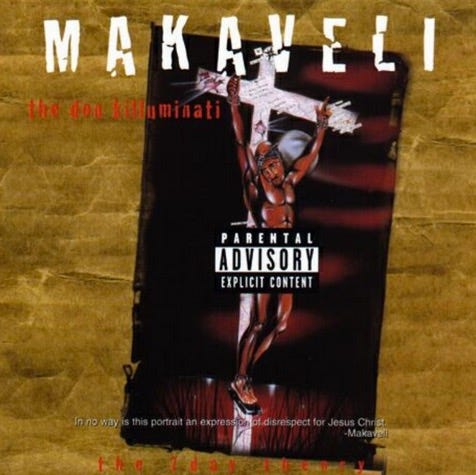 “I am always upbeat. I mean, there is never really a time where I am sad. If I am sad, you guys will know. You know what I mean? Because I am always an upbeat person. I am always smiling, always singing, you know what I mean?” Blackmon said. “But the times that I had that were a trial, they weren’t really trials like crucifixion, like Jesus’ trials or something like that, or Tupac, or something like that (laughter). Not those type of trials, you know how I mean? It was just trials of getting adjusted to the new culture, being a guy in Provo, getting used to the Honor Code, trials like that. Like I say, I have teammates that help me out with it, like Kurt [Henderson], Mitch [Mathews]. Jamaal [Williams] when he was up here. There are a lot of teammates that help me out. I didn’t really feel the wrath. I am upbeat right now just because that is who I am. I have always been like that. Always been happy.

Maybe it’s just because my previous story was about a UF player shooting a missile at his pregnant girlfriend’s head. But Devon Blackmon seems like a good kid.