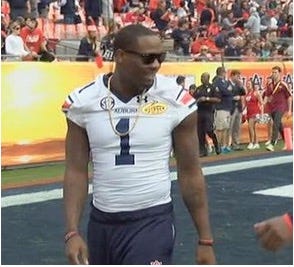 Auburn – D’haquille “Duke” Williams punched two security guards, a bartender assistant and another unidentified patron of a bar in Auburn following the football team’s win over San Jose State, according to an employee who spoke exclusively to AL.com.

The employee requested anonymity because they were not authorized to speak publicly about the incident.

According to the witness, the incident was sparked when a member of Williams’ party was kicked out of Skybar for wearing sunglasses inside, a violation of the bar’s dress code policy. Williams, who the witness said appeared intoxicated, attempted to get his friend back into the bar using his local celebrity status only to be denied.

What an update! I was honestly kind of blah about posting the Duke Williams blog yesterday – I mean I kind of had to, it was a star player on Auburn getting booted off the team, it’s newsworthy and a big deal in the college sports world. But the actual story was pretty boring – college kids get in scraps in bars all the time, figured somebody stepped on his shoes or hit on his girl and he shoved them and got kicked out or something. Woooooeeeeee was I wrong! Punching 2 security guards, a bartender and another person in the face because they wouldn’t let you wear your sunglasses inside? What’s wrong with you you crazy asshole?!

December 2014: Gus Malzahn suspends Williams for Auburn’s upcoming Outback Bowl matchup against Wisconsin, details unknown. Williams later issues an apology for being selfish and letting down his team. That was his first strike.

May 2014: Frustrated at Auburn, Williams tweeted: “Ion (sic) think This where I wanna be. Have to see what my options is (sic) after my last exam.” It was soon deleted. The next day, Auburn assistant Dameyune Craig tweets that everything is fine and Williams had a misunderstanding. Malzahn later commented on the cryptic message. This is another strike, perhaps call it 1.5.

August 2015: A no-show during the first week of fall camp, Williams was being held out for ‘personal reasons’ (a suspension) until he figured out whether or not he wanted to play at Auburn this season. Malzahn gave him another chance and he rejoined the team on Aug. 13. No tolerance policy instituted and Williams is down to his last chance.

October 2015: Malzahn’s had enough. Williams is dismissed with the announcement coming on a Monday night at 10 p.m. EST. “When individuals fail to meet the expectations of our program, there has to be consequences,” Malzahn’s statement read. “I gave D’haquille the chance to prove himself. I am disappointed that it did not work out.” [Saturday Down South]