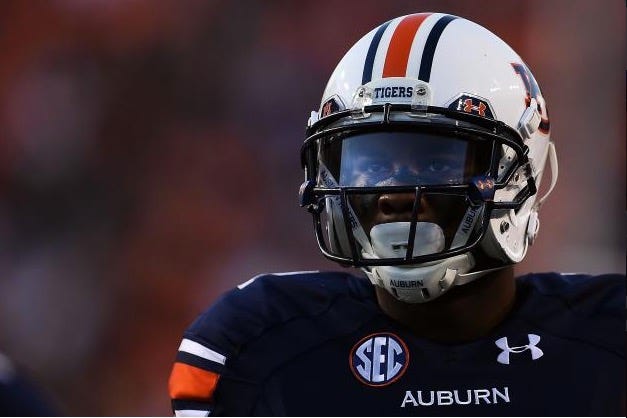 AUBURN - Duke Williams already has caught his last pass in an Auburn uniform.

The enigmatic receiver was dismissed from the team Monday after an off-the-field incident at a local nightclub during the weekend. The senior already was on a zero-tolerance policy with coach Gus Malzahn after drawing a suspension late last season, which kept Williams out of the Outback Bowl, and a second suspension in early August following a preseason practice session.

“When individuals fail to meet the expectations of our program, there has to be consequences,” Malzahn told AuburnTigers.com. “I gave D’haquille the chance to prove himself. I am disappointed that it did not work out.”

How can a HORRIBLE season at Auburn possibly get any worse? Hey I know…have the star wide receiver get kicked off the team for getting in a fight at the club! Not that big of a deal – the Auburn quarterbacks have looked super comfortable back there running the offense and slinging it around. [Sarcasm font]. Jeremy Johnson looking so bad and losing so much confidence he got benched 3 games in. Sean White getting 10 pass attempts last week because they don’t trust him to throw it. Cam Newton ain’t walking through that door and earning a paycheck for him and his dad, and it’s tough to get one of these new guys going for the future when you’re losing their top targets.

I guess I just never really get what goes through these kids heads. I get being a college kid and being young and stupid, and scraps at the bars or the clubs happen – but when you’re a top player at a major D1 program and on NFL mock draft boards and have this huge opportunity and awesome future ahead of, and you’re on a zero tolerance policy already from your coach, how do you even let yourself get in that situation?

December 2014: Gus Malzahn suspends Williams for Auburn’s upcoming Outback Bowl matchup against Wisconsin, details unknown. Williams later issues an apology for being selfish and letting down his team. That was his first strike.

May 2014: Frustrated at Auburn, Williams tweeted: “Ion (sic) think This where I wanna be. Have to see what my options is (sic) after my last exam.” It was soon deleted. The next day, Auburn assistant Dameyune Craig tweets that everything is fine and Williams had a misunderstanding. Malzahn later commented on the cryptic message. This is another strike, perhaps call it 1.5.

August 2015: A no-show during the first week of fall camp, Williams was being held out for ‘personal reasons’ (a suspension) until he figured out whether or not he wanted to play at Auburn this season. Malzahn gave him another chance and he rejoined the team on Aug. 13. No tolerance policy instituted and Williams is down to his last chance.

October 2015: Malzahn’s had enough. Williams is dismissed with the announcement coming on a Monday night at 10 p.m. EST. “When individuals fail to meet the expectations of our program, there has to be consequences,” Malzahn’s statement read. “I gave D’haquille the chance to prove himself. I am disappointed that it did not work out.” [Saturday Down South] 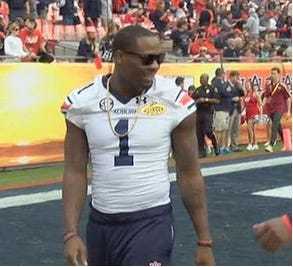