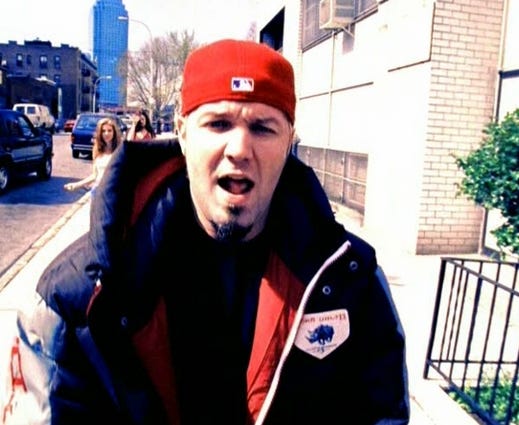 Independent - Limp Bizkit, who keep touring no matter how many years its been since everyone’s CD copy of ‘Chocolate Starfish and the Hot Dog Flavored Water’ got scratched beyond repair and lost down the back of a passenger seat, have been covering Rage Against the Machine’s ‘Killing in the Name’ at shows lately. “This is dedicated to the rap-rock band that started this shit,” frontman Fred Durst said when introducing the song last year. “When I first heard this song, that shit hit me right the fuck here [points to heart]. And this next part changed my life.”  Rage bassist Tim Commerford was recently asked how he felt about his part in spawning the nu metal band, and he didn’t hold back: “I do apologize for Limp Bizkit. I really do. I feel really bad that we inspired such bullshit… They’re gone, though. That’s the beautiful thing. There’s only one [rap metal band] left, and that’s Rage, and as far as I’m concerned, we’re the only one that matters.”

Ready for a hot take? Limp Bizkit did more for music than Rage Against The Machine. And that’s not taking anything away from RATM, but come on, Limp Bizkit was crucial to anyone who grew up in the 90’s/early 2000’s. We’re talking Nookie, N 2 Gether Now, Break Stuff, Rollin. Chocolate Starfish and the Hot Dog Flavored Water. The dude with the crazy eyes. Limp Bizkit getting on TRL and being mainstream helped more people than the politicians over at Rage Against The Machine. People like to hate on Limp Bizkit and Fred Durst and that’s fine and well, but let’s be real real here, they were a huge, huge act and you sing along with Nookie every time you hear it.

PS: Linkin Park doesn’t get enough run. They have a bazillion hits. What’s the wrap on them? I hate when you’re told what you’re supposed to like. If you can’t get down with some of those classic Linkin Park songs you’re a liar.

Late PS: Nowhere in this blog did I write “Limp Bizkit is better than RATM”. Somehow readers made up that I said that and got mad. Read the blog one time for me.