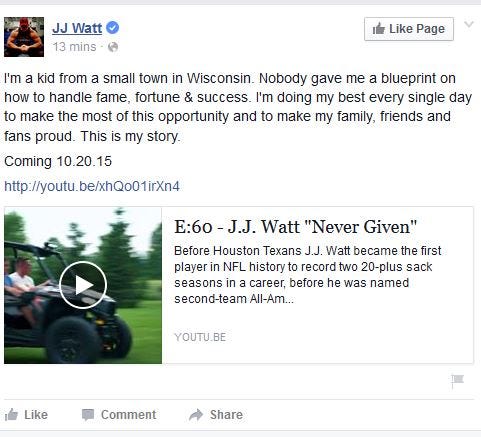 If you told me that anybody in the history of my life time could ever challenge Lebron for the most insufferable athlete on the planet I would have said you’re nuts. But guess what? JJ Watt is making a serious run at the crown. And unlike Lebron I don’t even have specific reasons for hating him. It’s not like the Texans ever beat the Pats. It’s not like I hate him because he’s a threat. I hate him because he won’t shut up about how hard he works. How much he loves his mother. How he’s just a hometown kid. DUDE SHUT UP. Nobody in the NFL had a blue print on how to handle fame and fortune. You’re a very good football player who tries to pretend he’s humble by constantly shoving how humble he is in your face to the point he’s become least humble guy of all time.