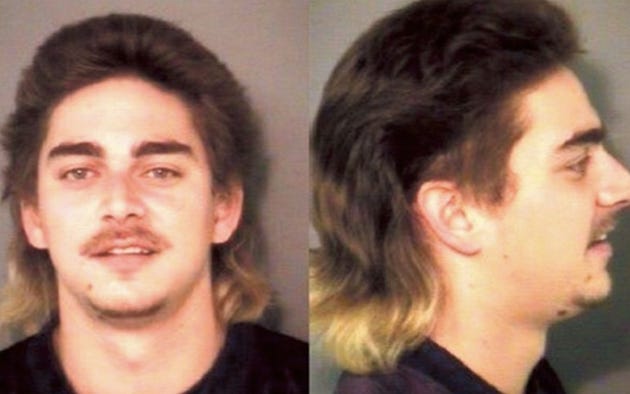 (Source) – Police arrested a North Carolina man last Sunday after he allegedly stole a minor league baseball team’s mascot costume and partied around Charlotte while wearing it. The mugshot and mullet of Joe Gillespie, who was charged with possession of stolen property and possession of marijuana, contained so much mystery, but thankfully someone got the details on his adventure.

Ryan Pitkin of Creative Loafing Charlotte talked to Gillespie; the well-coiffed antihero said he didn’t break into BB&T Ballpark, but actually passed out in a stairwell after attending the previous day’s Beerfest. Gillespie woke up past midnight and realized he was still in the ballpark, and that’s when he found the Charlotte Knights’ mascot, Homer the Dragon:

[My friend] said he was at Hooters, so I told him to stay there. I start walking down the hallway to leave and I look to my right and see the mascot dressing room. I thought, there’s no way this door is unlocked. I turned the handle and it opens right up and there’s the damned costume.

So, I suited right up, walked out the door and proceeded to Hooters. I walked right up into Hooters and my buddy didn’t even know it was me. I was ragin’ dude.

I left Hooters and there was a big line at Tilt next door. I just said, “Yo man, can I go in?” The guy said, “No,” and I was like, “Dude, You’re not gonna let Homer the fuckin’ mascot into your bar right now?” Then he said I could go in. There was nobody on the dance floor. I come sliding in and start getting it. I was doing all the moves you always wanted to try but are too embarrassed to.

Look I’m not a lawyer and have never pretended to be, but I’ve seen a lot of cop movies and I’m pretty sure this is entrapment. It stinks to high heavens of a set-up. You leave a guy with a party haircut passed out in an empty ballpark with an unlocked door to the mascot room? Well what the fuck was he supposed to do? Not take the Homer costume and go to Hooters and rage his dick off? No. That was out of the question. Joe Gillespie’s free will was taken from him the moment he woke up in that stairwell. He’s a partier. A rager. He gets on the dance floor and gets it. You can’t leave a man like that free reign over mascot costumes and not expect him to take advantage. There have been a lot of issues with law enforcement recently but, in my humble opinion, this is the most egregious one. Joe didn’t hurt anybody. He was just ragin’, dude. Let him live.