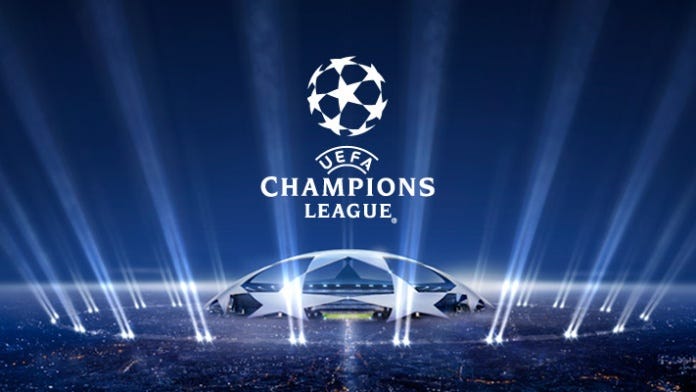 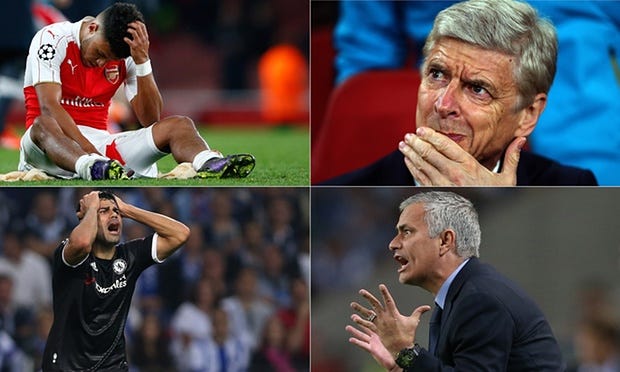 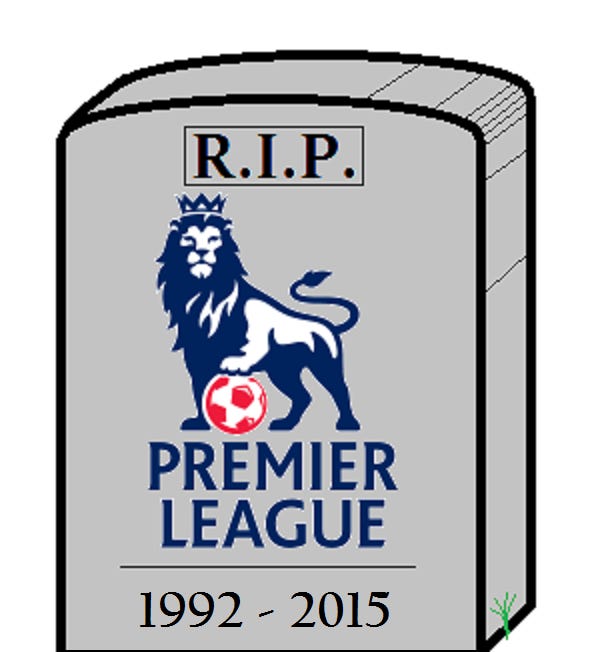 Anyway, if there is a silver lining in all this EPL horrendousness it is that now when Tottenham finish the season in fourth place, Arsenal and Chelsea fans can sleep soundly at night knowing that they successfully prevented Spurs from playing in the Champions League yet again, albeit this time thanks to their own impotence.

More important than the hemming and hawing about whether and how the EPL, which makes and spends more money than any league on god’s green earth, is apparently going downhill, let’s focus instead for the time being on what is directly in front of us:

So a quick recap of what happened yesterday (beyond just the death of the already deader than dead EPL): 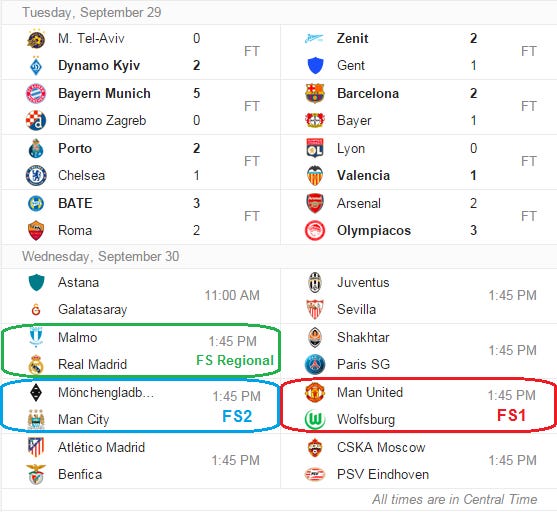 – Impressive bounce back win for Valenthia on the road, which puts La Liga right back on track to progress FIVE teams into the 16-club knockout stage. Here’s to you, Ethhhhhhhpanya.

– Raise your hand if you know what country BATE is in? Right, nobody, and yet those spritely Belarusians took a hard fought three points* off Roma. Soccer is a funny old game sometimes.

– As some of you may recall me saying, this ain’t the fearsome Barça of years past – last year, most definitely included. Bayer could have gone in at halftime up by four goals if not for poor finishing and Chicharito (here’s hoping he brings that form in on October 10).

– Know who is the same fearsome club of years past? Bayern. Ze Germans have absolutely no qualms about raping and pillaging whatever club is unfortunate enough to have to play them right now.

– Finally, a reminder of some of the recent injuries that will no doubt have an impact on today’s fixtures:

Wolfsburg has done a bit of a 180 on us since last year, when the club couldn’t stop scoring nor conceding goals. This season their goals scoring rate has tempered a bit but the real difference is defensively, where they had not given up more than one goal in any game this season… until Robert Lewandowski stole every single Wolfsburg player’s girlfriend over the span of nine minutes last week. Point being, defensively the club has been playing well.

This is a tough matchup for United given the recent spate of injuries to various defenders, but the club has more depth at the back than people give them credit for (though Daley Blind is not a long-term answer). Unfortunately for the Germans, they are dealing with even more injuries at the moment. United’s attack is slowly… ever so slowly… finding its form with Rooney, Memphis, Mata and Martial looking more formidable with every passing game. Wolfy will put up a fight but the Red Devils have too much quality. United to win 2-1. 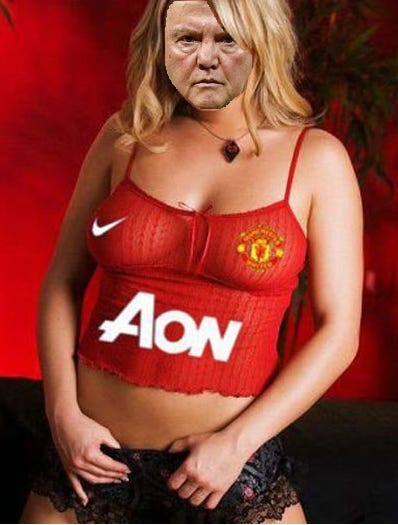 Betting on home dogs is a pretty solid strategy in the NFL and the same could be said about Champions League, where the margins between loss/draw or draw/win are – Bayern Munich aside for the moment – razor thin. But eff that noise. I’m going City to win and let me tell you the three reasons why:

1) The club hasn’t played a game in a week, having taken the weekend completely off, so they will be fully rested for today.

“But they just won three games in a row!” will come the automatic rejoinder from a Bundesliga fanboy.

Ah, indeed, great point… except two of those wins were against two of the worst clubs in the German league and the other is against a club (Koln) that is winless in its last four.

3) David Silva. Does he look like a chinchilla? Yes. Is he instrumental to the success of City? Absolutely. With him, (Good) Yaya, De Bruyne and an – allegedly – healthy Sergio Aguero up top this club will again look like the world-beaters you might recall from the first month of the season. 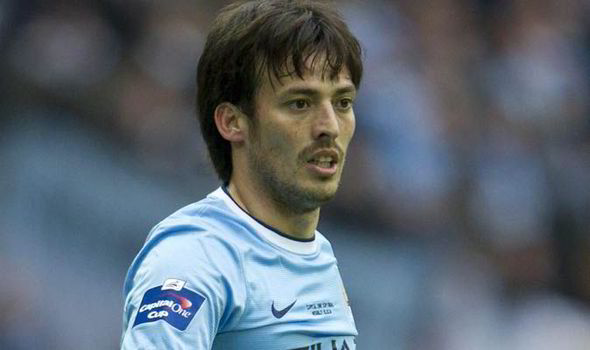 Other games: Real Madrid (-425) traveling to Malmo (+1200) would not even be worth mentioning if it were being played at the Santiago Bernabeu, but the fact the mini Swedish fish are playing on home soil means they have a chance… to not lose by double-digits. Real to win 3-0.

For the record, FOX’s decision to show that game over Juventus (-120) hosting Sevilla (+350) is sneakily one of their most atrocious programming errors in some time. This game would get my vote as likely to offer the most entertainment out of any of the fixtures on today’s slate, and yet it can’t even get on one of the THREE channels (not including Fox Soccer Plus) that Champions League is being shown on. Ain’t that some bullshit. Anyway, Sevilla is a solid team but they seem to have a “thing” about playing on the road this season – as in, they kinda sorta suck away from the Ramón Sánchez Pizjuán (one of the coolest sounding stadiums around, btw). The Italians are missing some important puzzle pieces (see above), which is the only reason I’m not calling this my lock of the millennium, but I do think they will still pull it out. Juve to win 2-1. 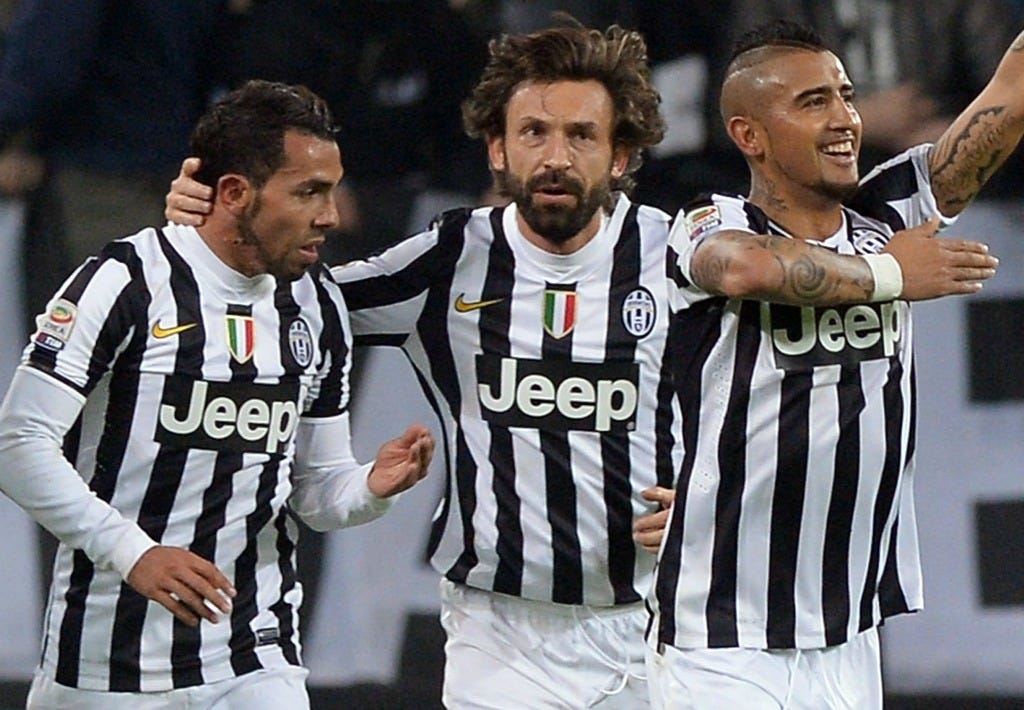 Wait, wait! Before you go! Here’s your handy dandy reminder that tonight the Philadelphia Union host Sporting KC in the final of the U.S. Open Cup. It’s on TV so you can watch it with your eyes if you so desire (6pm CT on ESPN2).

So there it is, Barstool’s second-best ever Champions League preview this week. Check ya on Friday for the weekend preview (shameless plug: don’t look now but we’ve got a bigggggggggggggg Sunday coming up).