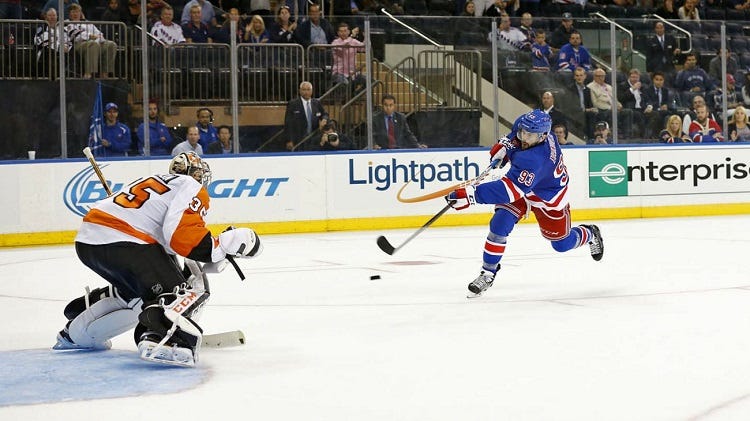 Because this preseason, the NHL began testing out 3-on-3 overtime and we’ve seen plenty of teams already taking advantage of the open ice and finishing off the game in style with some beautiful tic-tac passing. However, the Philadelphia Flyers seem to have something against the 3-on-3 overtime and they refuse to play by the rules. So far the team has gone to overtime twice (there was supposed to be another league mandated 3rd overtime game but that asshole Pope Francis had to come to town to ruin everything). Anyway, the first 3-on-3 overtime ended with nobody scoring because Brayden Schenn took a penalty halfway through the period that resulted in 2 minutes of 4-on-3 and then the rest of the game ended with 4-on-4. And then last night against the Rangers, this happened.

Now here’s a little pro-tip for all of you at home who may not be critically self-proclaimed hockey experts like myself. If you want to win a 3-on-3 overtime, giving up a penalty shot is pretty ill advised. I mean sure, there’s a chance that you can still get out of there with the W after giving up a penalty shot, but you’re skating on thin ice. So now this is just fan-fucking-tastic. All last season the Flyers were one of the worst teams in the shootout. And with the 3-on-3 overtime, the thought process is that there are going to be much less games which end up going to the shootout so Flyers fans had a slight reason to be optimistic heading into the season. But now, as it would appear, the Flyers are even worse at the 3-on-3 overtime than they were in the shootout and everything sucks.

While we’re on the subject of last night’s game, let’s briefly talk about Dick Trash and what a piece of shit that guy is.

Luckily Voracek is fine now and was practicing today, but if Nash ever even thinks about touching Jake like that again then I need Radko Gudas to go out there and give him the Wolf “The Dentist” Stansson treatment.