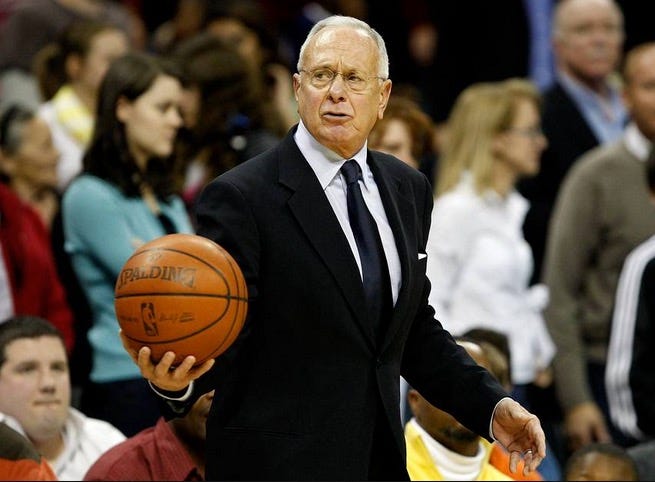 ESPN – The NCAA has banned SMU from 2016 postseason play and has suspended Larry Brown for 30 percent of the team’s games this season due to a lack of head coach control, a source close to the situation said.

The 30 percent ban for Brown means he will miss nine games total. The school also will be hit with nine scholarship losses over the next three years, although SMU was two below the limit this past season.

The NCAA is expected to announce the sanctions at 11 a.m. ET on Tuesday.

This marks the third time a Brown-coached program has been sanctioned by the NCAA, with the others happening at Kansas and UCLA.

Part of the investigation at SMU stemmed from whether former basketball administrator and ex-assistant coach Ulric Maligi helped Keith Frazier to become eligible to play at SMU, a source told ESPN.

The school and Brown met with the NCAA’s committee of infractions in late June. Maligi took a leave of absence in the middle of last season, but was not found to be involved after the NCAA investigation.

A source said the former basketball administrator did not agree to speak with the NCAA about the investigation.

SMU is expected to be a preseason Top 25 team and a contender for the American Athletic title.

Larry Brown strikes again. He now has a hat trick in sanctions at the collegiate level. For those of you that haven’t heard yet, SMU basketball just got hit with massive sanctions. The Mustangs won’t be eligible for postseason play this year, Larry Brown is suspended for at least 30 percent of the games and there will be nine scholarship losses the next three years.

This is massive news because SMU is going to be good this year. The Mustangs were a favorite to repeat as champions in the American Conference, now letting teams like UConn, Tulsa and Cincinnati battle it out for the automatic berth.

The investigation stemmed from whether former basketball administrator (unnamed) and ex-assistant coach Ulric Maligi helped former McDonald’s All-American Keith Frazier become academically eligible to play at SMU. Maligi took a leave of absence in late June after SMU and Brown met with the NCAA infractions committee. Fraizer was suspended for most of last season due to academic eligibility questions (shocking, I know) but was cleared to play this year.

The biggest bullshit problem I have with this ruling is the postseason ban for this year. It penalizes kids like Markus Kennedy and Nic Moore, who are seniors and now have nothing to play for. Meanwhile a school like UNC, who has been under investigation for a couple years now won’t face a ruling until 2016.

The NCAA needs to do the right thing and allow a waiver to let SMU players transfer out for this year and be eligible right away.

As always, Larry Brown is a pretty shitty coach and you have to think he’ll be on his way out of SMU any minute now. ESPN’s Jeff Goodman did tweet out that we could see an appeal by SMU, which is something to keep an eye out as this could possibly jam up the postseason ban for this year.

Either way, it’s a mess down in SMU, something the school has seen before with the Death Penalty to the football team back in the 1980s.