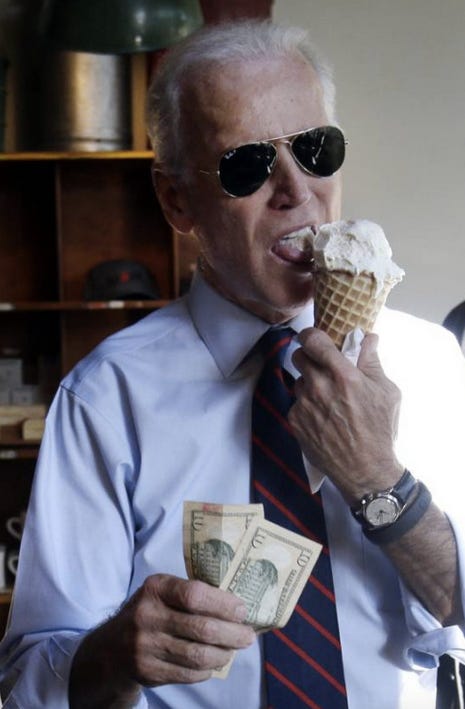 “Neilia was my very best friend, my greatest ally, my sensuous lover. The longer we lived together the more we enjoyed everything from sex to sports. Let me show you my favorite picture of her,” he says, holding up a snapshot of Neilia in a bikini. “She had the best body of any woman I ever saw. She looks better than a Playboy bunny, doesn’t she?” “My beautiful millionaire wife was a conservative Republican before she met me. But she changed her registration.” “At first she stayed at home with the kids while I campaigned but that didn’t work out because I’d come back too tired to talk to her. I might satisfy her in bed but I didn’t have much time for anything else.”

Big Poppa Biden out there getting nasty! I know this morning I committed to Trump if he gets Ernie Adams on the horn, but if Biden decides to throw his hat in the ring it’s gonna be hard to thumb your nose at this. I mean there’s no bigger power move in history strolling into an interview with a picture of your wife in a bikini and talking about how great you two used to fuck. Trump can call as many people idiots and losers as he wants, there’s no topping the “Oh yeah look at my wife’s Playboy body. I didn’t have time to do much but work and fuck her brains out.” It’s exactly like Costanza rolling in with the pic of his fake fiance. Once you know a guy puts it down on tens then you’ve got limitless faith in him. I’ve always been a Biden guy but this puts him right over the top. “I might satisfy her in bed but I didn’t have time for much else.” That’s the quote of the century. We got sensual as hell but I didn’t get caught up in all that other husband bullshit, little too busy being the youngest motherfucker in the Senate.