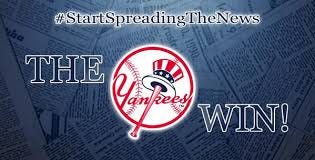 The Yankees magic number is currently at 3 but in reality they could clinch as soon as tonight. If they beat Boston and either Oakland beats the Angels or Seattle beats Houston its over. The way the West schedule plays out, in order for both the Angels and Houston to win out, Texas would have to lose 4 games and the Yankees would be in anyway. So the long story short, is that the Yankees will likely clinch a Wild Card birth in the next few days and people will debate whether or not the 27 time World Champion, New York Yankees, should bother celebrating getting into a 1 game playoff. The answer is: Yes they should.

I’ve been a Yankees fan my whole life and think they are the best thing to ever happen. To the entire planet. The Yankees are the greatest established organization this world has ever seen. And so as a fan of them, I am better than people who are not. And while I’ve grown accustomed to nothing but excellence, these guys on this squad should celebrate. This team wasn’t supposed to sniff the playoffs, let alone put together a season that saw them in first place a majority of the yea. The guys who put on the uniforms every day and put up with long road trips, the media and fans should get to pop some champagne. On top of that, most of the guys on this team weren’t here the last time we made the playoffs. For some of the guys, they haven’t even been to the postseason. So why not drink it in to celebrate? If they hadn’t added a second Wild Card team to the playoffs, we would be in the ALDS and celebrate, so why should that rule change make this mean any less to the players? It shouldn’t.

However, we as fans have nothing to celebrate. Unlike the guys on the field, we’ve been there before and we’ve be further than these guys have. Mets fans and Cubs fans should be going nuts because their teams have been garbage for so long that even if they get swept, this was a great year for them. As Yankee fans we should be held to a higher standard of not bragging about making it to the playoffs no matter if it’s a division or a wild card spot. We should be happy we still have a shot, but not talking trash to anyone about it.

At the end of the day, there were guys who underperformed and guys who performed above expectations, but they all deserve to celebrate being on of the 10 teams that still have a chance at winning a World Series. We as fans? We need more to get pumped up, but that’s because we have been spoiled with winning for the last 20 years.