Nothing stops this train. Nothing.

Before yesterday started, many wondered if the Pats were about to fall into a classic trap game. I assume those were the same people who thought that the Patriots would fall to an emotional Bills team in week 2. People who forget what the Patriots organization was put through this summer, and people who forget what New England did to the world the last time their name was dragged through the mud.

After two drives, all worries were squashed.

Blake Bortles opened the game to reveal his plan was to throw into double coverage all day, and the defense revealed that they would be employing the often used and rarely successful tactic of refusing to cover Gronk. 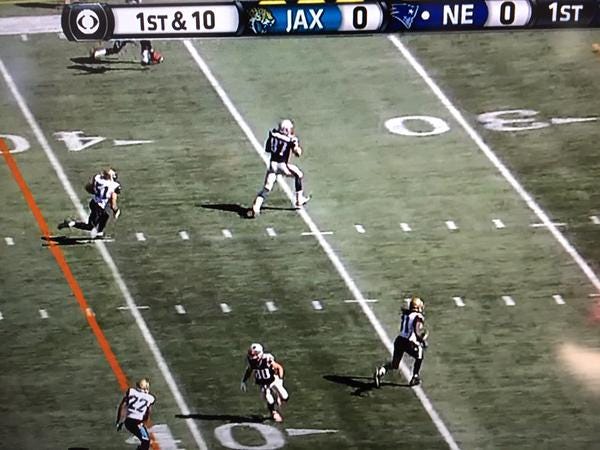 It had the same result it always does: a huge gain. From there, the route was on.

Sure, it may have remained rather close on the scoreboard. But, for those watching, it was never in doubt. Why, you ask? Well that’s simple, god was on our side.

The last thing the Patriots need is divine help, but when the Patriot Pope is in the stands you can go ahead and mark that one down as a W.

If the Pope wasn’t convincing enough, McCourty went ahead and hammered the final nail into the crucifix right before half. People GameCast watching may not have thought that a 13-3 game was as over as it really was, but an INT followed by a TD to make it 20-3 at the break surely made that clear.

From there, it turned into a laugher. Brady threw number 400 (the quickest to ever do so, as well as far and away the least interceptions of any of the four men in the 400 Club) and Amendola immediately handed that piece of history off to a fan. The ball was later retrieved by security but I think it’s quite telling that everyone on the field didn’t know “Hey, Tom’s next TD is number 400.” Personal accomplishments aren’t talked about in New England.

Then came a rather scary moment, for Jacksonville. Davon House had a clear shot to drill an unsuspecting Gronk, which he took. But, because it’s Gronk and he’s made out of Adamantium, House ended up taking the brunt of it.

It’s not often that an NFL athlete can take the opportunity to destroy another man and end up in a pile of their own broken bones and guts, but that’s exactly what happens when you run into Rob Gronkowski.

Then things got a little more embarrassing for Jacksonville, as they tried to get back into an already lost game by running a fake punt. They chose to run that fake at the greatest special teams player in the history of the NFL and it went… poorly.

That led to more of the same. By more of the same, I mean Patriots points, which they did every time they got their hands on the ball, save for when they sent Jimmy out to kneel the ball down at the end.

As you’ll notice, the Patriots didn’t let up. In fact, they did quite the opposite, they pushed harder and scored touchdowns the last 4 times they got the ball. Viewers at home heard “Tom Brady, with a sizable lead, is still in the game” and I think that’s something everyone should get used to hearing. That’s how this season is going to go. Points will be scored, and they will continue to be scored for as long as time permits. No one will be safe. The methylamine keeps flowing. No matter what. Tom Brady has more touchdown passes than the Patriots have punts this year, that oughta tell you what their plans for the future are.

Oh, and Tom’s post game look? Gold. Cardigan and Tom Ford kicks. A mix of wisdom and youth that is perfect for Tom Brady. 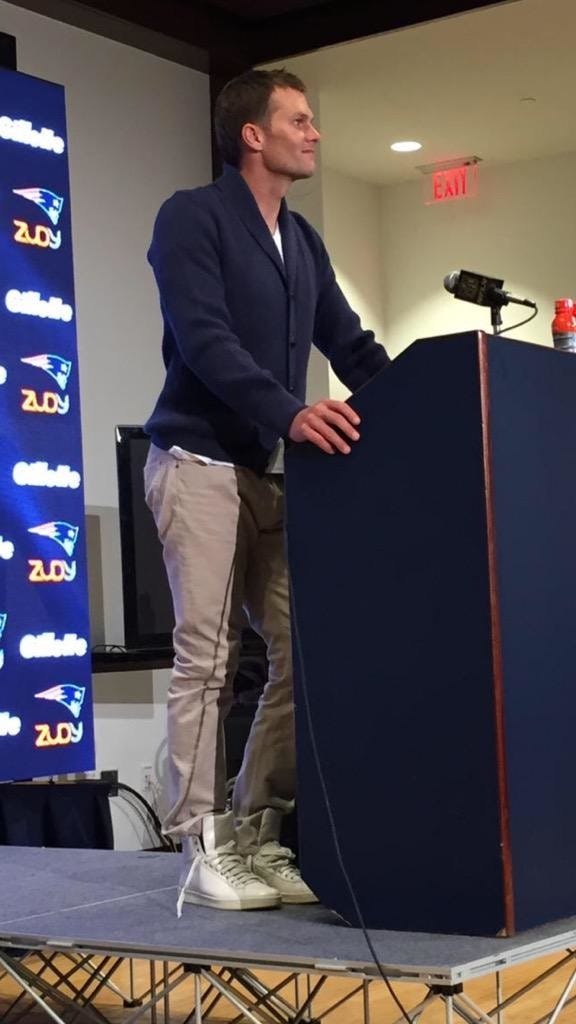