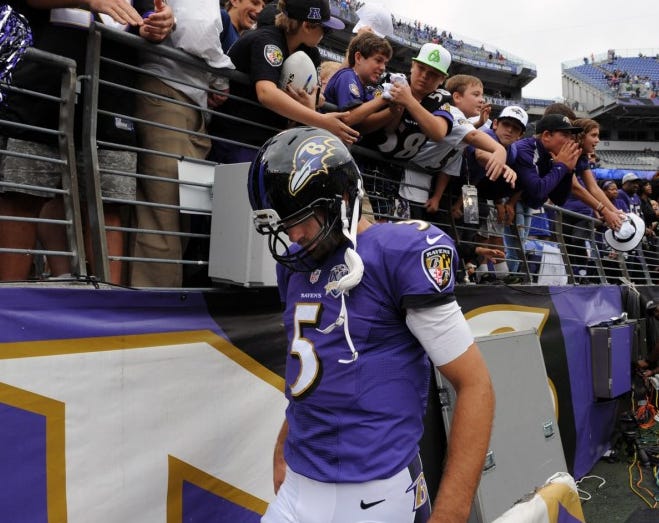 What a disaster. We knew the early going would be challenging, but 0-3 never entered my mind. So now I sit here, slamming the panic button while I look for some sort of silver lining. 0-3 is 0-3. Something like 2.5% of teams that have started 0-3 have ended up making the playoffs since 1990. The odds are long, but crazier things have happened. I’ll get to that at the end. Still have a loss to break down, so here goes:

– Steve Smith is the reason I keep hanging on. After the offense was a complete and utter joke in week 1, SSS has essentially been the entire offense. 23 catches, 336 yards, and 2 touchdowns in the past 2 weeks. It’s gotten to the point where every time I see Flacco drop back and throw the ball anywhere but the flat, I know it’s going to #89. Time and time again. the Ravens were on the ropes in this football game needing a 3rd or 4th down completion, and Steve continued to make play after play. This one especially was something…

The guy gave everything he had out there. Here’s a real life progression of events that happened AFTER that incredible touchdown.

1. Steve Smith vomits on the sideline, tells the medical staff to go prepare an IV

2. Steve Smith goes out for an offensive series, catching 2 more balls for 27 yards on a FG drive.

3. Steve Smith dies on the field at the end of said drive 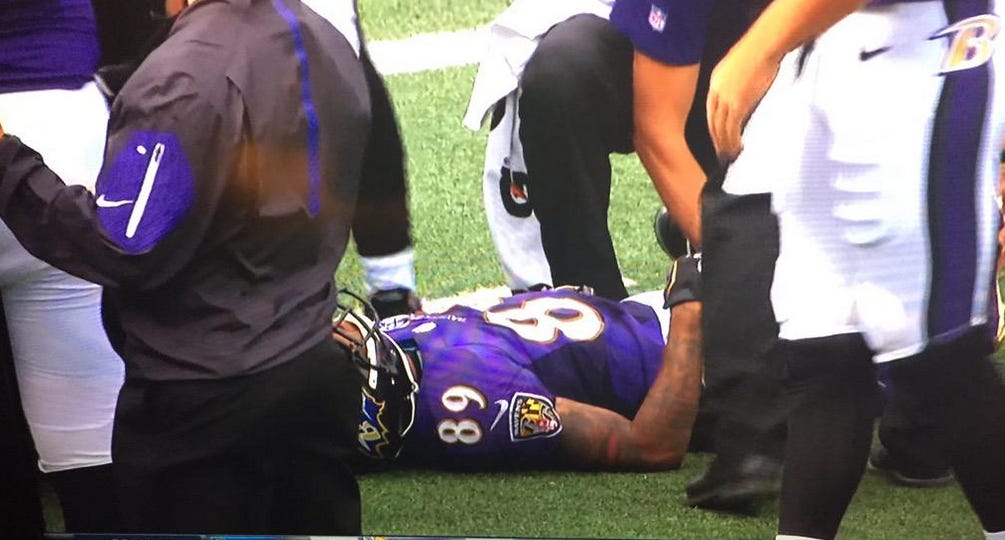 4. Steve Smith gets his IV right there on the bench 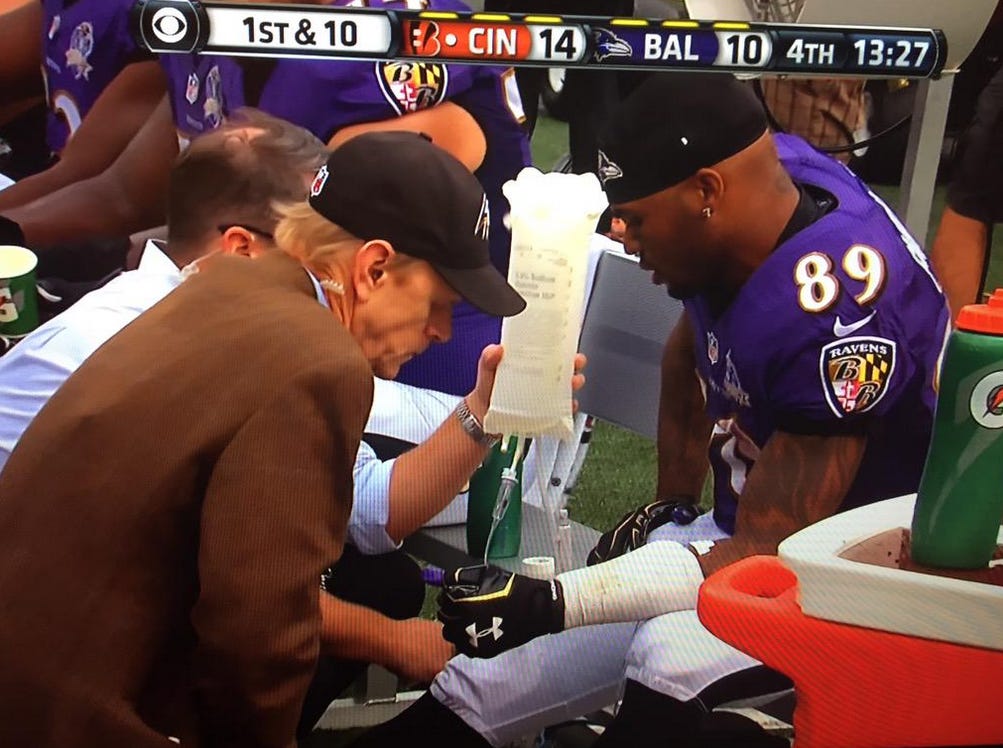 5. Steve Smith gets back out there and continues to dominate, extending a drive with a 3rd and 11 catch and finishing it with a go-ahead touchdown

It was an absolutely incredible show to watch in a losing effort. He deserved so much better, and the NFL will be said to see him go at the end of the year.

– On the flip side, AJ Green was nearly as impressive as Steve  (and I only say “nearly” because the Bengals get production from people other than Green). He owns the Ravens through and through. Every time the Ravens play Cincinnati, Green torches us for a long one. Just gotta tip your cap and call him your daddy.

– On a related note, I’m so envious that guys like Dalton and Ryan and Stafford and Romo and Peyton get these big tall shiny toys that can make a catch on any ball you throw them. Meanwhile Flacco is stuck with a 1st round receiver that can’t get off the training table, let alone even close to the playing field. So stupid

– It was nice to see the Ravens move the ball in the 2nd half, but they did so by completely abandoning the run. Sure, you can say that the ground game wasn’t working in the early going, but the run game should be the strength of this offense. Shit, I’m convinced Marc Trestman is under the impression that running the football on first down is against the rules of football. A good first down run is how you create options for your offense. If there were any concerns with Trestman coming in, it was that he’s too pass-happy. That concern is growing quickly. We can’t expect that kind of performance from SSS every week. Need to get back to pounding the football

– Funny thing is, Trestman was the better of the two Ravens coordinators. We’re getting very very close to “get the fuck off my team” status with Dean Pees. Yeah he might not have Suggs to work with, but there’s no excuse for his inability to make adjustments. He goes with this “bend but don’t break” ideology that doesn’t work in every scenario. I felt like I was watching a goddamn replay of Week 1 last year against the Bengals. Or last week against the Raiders. Or both times he blew a 14 point lead in New England. It’s a goddamn joke and I’m sick of it. You can’t go into cover 2 against NFL QB’s and expect to get a stop. You can’t have your corners ten yards off the LOS on 3rd and 4, it makes no fucking sense. If the defense was capable of making a stop, the Ravens would be 2-1 and in the drivers’ seat of the AFC North. It’s infuriating that if he could just get the defense to make a late stop, we’re not even talking about panic in Baltimore. That’s how small the margin has been in all 3 losses. Something has to change, and that change starts with Dean Pees.

– Lack of discipline was also a point of frustration yesterday. 13 penalties for 116 yards just doesn’t sound like a John Harbaugh coached football team. You could make a case that the referees were a bit flag-happy, but you don’t get 13 flags without being wildly undisciplined. Jeremy Zuttah and Rashaan Melvin are the two guys to single out here. Zuttah has been pretty bad so far this season, and I can’t help but think he’s a major part of the decline of the running game. Melvin just stinks, we expect that from him, but Zuttah has gotta clean it up.

– Seeing Elvis Dumervil get in there and create a defensive TD was a good sign. I had almost forgotten he existed up until that point. The Ravens need him to step up more than just about anyone on the defense, and he made a big play at a point when they really needed one. It’s just a shame that the defense still couldn’t finish the job despite putting their own points on the board.

– Maxx Williams showed some life, and nearly made an acrobatic game-saving catch on a deep ball on the final 4th down. Nick Boyle got in the mix too with a pair of catches, but was only on the field because Crockett Gillmore missed the 2nd half with a mysterious injury. Awaiting word on what that was about. Seems important considering the tight ends are the only ones catching passes besides SSS.

– The Ravens have a loser mentality right now. Flacco admitted as much in the post-game, saying ““We have to get our minds in check … We’re not believing in ourselves enough, and we’re not envisioning winning football games.” Steve says he’s not frustrated with losing, he’s pissed off about losing. He should be and that’s the mentality everyone else needs to have. We expect better than this garbage in Baltimore. Smith is doing everything he can to provide leadership, but somebody’s gotta step up on the defensive side of the ball. That’s where losing Suggs and Ngata hurts. Jimmy Smith is trying to be that guy, but it’s hard for your guys to buy in when you’re not carrying your own weight on the field. Maybe they just need to get one win under their belt to gain some confidence. I don’t know. But it’s clear that something isn’t right with the attitude of the Ravens.

I can’t spend any more time thinking about this football game or I’m going to go insane. All you can do is look to the future. The Ravens have what now appears to be a winnable football against Mike Vick in Pittsburgh on Thursday. They follow that up with games against the Browns and 49ers and suddenly 3-3 doesn’t seem that far away. Seems impossible to be optimistic about the Ravens right now, but 3-3 and a favorable home-heavy schedule the rest of the way means this season is far from over. Just need that win in Pittsburgh more than I need to breathe. Gotta get to work.