As you’ve probably heard by now, there was a bit of a scuffle in the Nats dugout late in the game yesterday between MVP Bryce Harper and aged closer Jonathan Papelbon. It was a perfect ending to this clusterfuck of a season, where Bryce almost single-handily kept this team in the playoff race until the final 2 weeks of the season. But just as their playoff dreams came to and end, the wheels came off, resulting in a fight between the most hated player in baseball, Papelbon, and the 22 year old face of game, Harper. Why did they fight though?

It all started last week, when Pap plunked Manny Machado of the Orioles. Bryce was none-too-pleased by Papelbon’s actions, saying

“I mean Manny freaking hit a homer and walked it off and somebody drilled him,” an irritated Harper said last night. “It’s pretty tired. It’s one of those situations where it happens. I don’t know. I’ll probably get drilled tomorrow. We’ll see what happens.”

So he called out Papelbon, which I’m sure didn’t sit right with the 34 year old. At the time I thought it was ok that Papelbon threw at Machado, who pimped his home run for a long, long time. It certainly wasn’t the first time a pitcher has hit a batter for doing that, and it won’t be the last. But Harper didn’t want to be plunked because of a decision Papelbon made to hit his friend Machado, which makes way more sense. And props to the Orioles for not retaliating and possibly injuring Bryce, as they probably respected his reaction to Papelbon’s dealing as well.

Flash forward to yesterday. Bryce pops out in the 8th.

Now, when I first heard of what happened, I was under the assumption Bryce stood in the box and basically walked back to the dugout. If I’m not mistaken, he winds up at first base there. I can see the argument for not running it out, but come on. If we are going to fist fight every player who jogs to first on a routine pop out, the entire league is going to have black eyes.

So Bryce makes his way back to the dugout where Papelbon decided to give him shit for not hustling or whatever, which is bullshit, because if there is one guy who gives 100% every game, it’s Bryce Harper. Guy has been injured for the last 3 seasons for trying too hard to make plays. Pretty funny how the media says he plays recklessly in meaningless games, and now Papelbon is saying he’s not trying hard enough or whatever. But Papelbon was still salty from Bryce calling him out for hitting Machado, and found a time to make it all about himself. As if Papelbon is some sort of leader on the team.

Pap starts beaking, Harper yells back, and next thing you know Papelbons’s hand is around Harper’s throat. Nice. 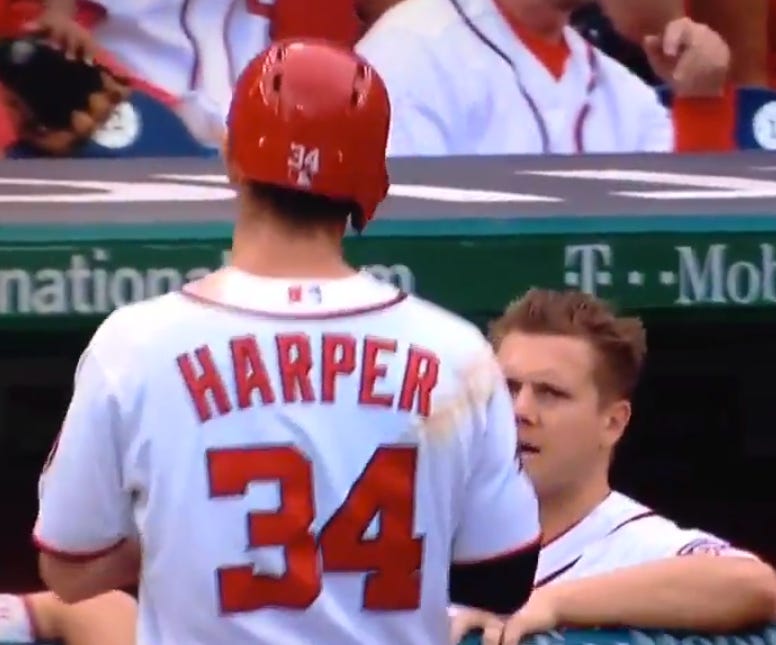 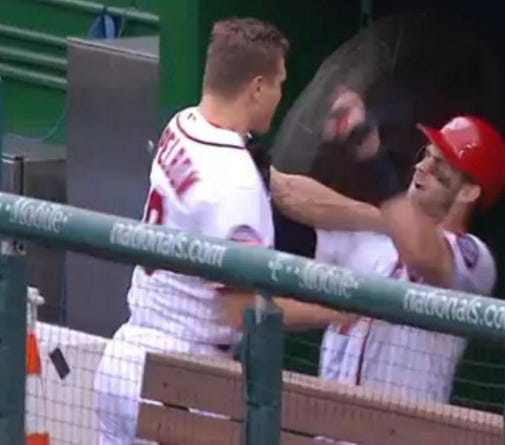 What’s the more outrageous thing here- the fact Harper finished the play at first base, or the fact Matt Williams sent Papelbon back out in the 9th? It’s insanity. Papelbon returns to the hill and gives up a million runs.

Manager Matt Williams — who allowed Papelbon to pitch after the fight — told the Washington Post on Sunday night that he was not aware of the severity of the scrap because he was at the other end of the dugout.

WHAT IN THE WORLD? How would a manager not know what just happened? Guy is a total fucking idiot with no control over the team. Meanwhile Papelbon probably grooved those pitches, and the fact both are still on the club right this very second is plain stupid.

The Nats owe Papelbon 11 million dollars next season. Let me be take this time to say I was wrong about him. I thought bringing in a guy who was perfect in closing situations this year would bolster the bullpen. I thought the Nats could be professionals with the same goal to win the World Series and figure out how to co-exist with a guy like Papelbon. I was dead wrong. Drew Storen, who had blown 1 save all season and was pitching lights out, imploded. He became the worst relief pitcher of all time after being moved to the 8th. There was no 1-2 punch between them, because Papelbon rarely got to enter the game. The Nats trading for Papelbon isn’t the reason this team isn’t in the playoffs, but it certainly didn’t help them either.

He is who everyone said he is. He isn’t a guy you want on your team. His pitching talent aside, he’s just not a guy who you want in your clubhouse, he’s not a guy players like to be around, and he’s a fucking lunatic who goes after the best player you’ll ever watch play baseball.

The fact Papelbon would even show up to the park today is crazy. The final 6 games of this season can’t end soon enough.