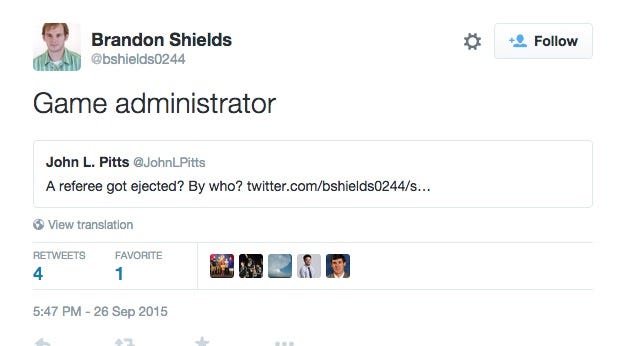 According to Brandon Shields of Mississippi Gridiron Magazine, EMCC coach Buddy Stephens was ejected and got in an altercation with a referee. The referee punched Stephens and was ejected by a school administrator. Later, two players got in a fight on the sidelines that resulted in another ejection.

In summary, a coach got ejected for arguing, a referee was ejected for punching that coach and then not long after that two players started fighting and one was ejected.

Mississippi Juco football…it’s no joke. The passion for college football in the South doesn’t just stop at the SEC, nooooo way. Extends all the way down to guys like “EMCC” and “Itawamba Community” where things get so passionate and intense that refs are slugging head coaches in the jaw.

Anyway I’m just glad we’re extending the violence on the football field a little bit, mixing things up. There’s always been the player on player violence – the massive hits, the bone breaking tackles. Recently we’ve had players going after the referees with blindside hits and truck sticks…and now it looks like we’ve got refs going after coaches. Everybody fighting everybody out there. It’s not the most exciting sport in America for nothing folks, at this point you just don’t know who is going to get their ass whooped next.

Only surprising thing is this hasn’t happened sooner. Refs take soooooo much shit every single game (roughly 98% of it well deserved, to be fair) and it took until a Mississippi Junior College game in 2015 for one of them to finally snap. Seriously how has Brian Kelly not been haymakered yet?