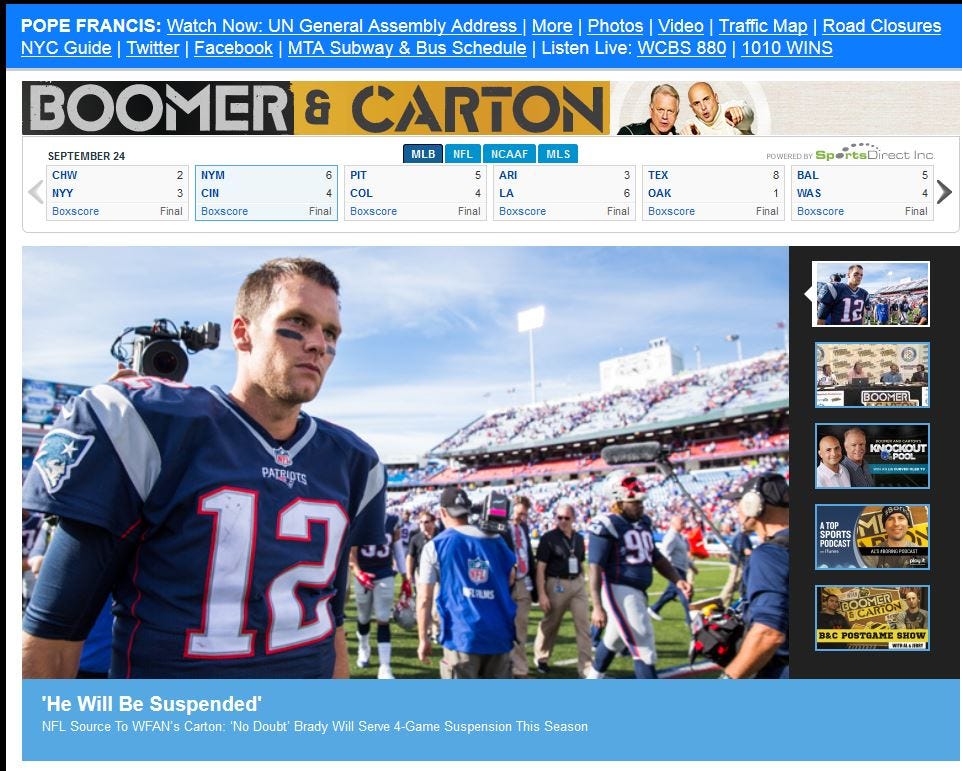 Okay first things first. The only reason I know who this guy Carton is is because I know he is KFC’s boy. I also know that just like KFC he is a pathetic jealous loser Jets fan. Listen I don’t even care about this report. Like if he wants to say he had dinner with Mike Kensil and Kensil told him that Brady was 1000% gonna be suspended this year knock yourself out. I actually hope it’s true. The image of a delusional Mike Kensil just walking around in circles saying “Brady is gonna be suspended, Brady is gonna be suspended” over and over to himself when he hasn’t showered or shaved in 6 months and his family left him is arousing to say the least.

But that’s really neither here nor there. Everybody with a brain knows this story is bullshit. So why did I blog it? Because I’m confused about he Boomer and Carton show? I thought this was a big time radio show? I must be wrong about that because this reeks of desperation. This is sinking to the bottom of the ocean. It’s not just that they mentioned this in passing, but rather they are publicizing the shit out of it. They are acting like this is a real story. Like hey our ratings stink so let’s make shit up about the Patriots and rile up their fanbase and watch the cheap clicks roll in. Can you be more pathetic? I mean you can’t just make up shit up out of thin air, credit anonymous sources and then act like it’s real. Oh wait with Deflategate I guess you can. Oh well. They Hate Us Cause They Ain’t Us Indeed. I can’t wait to hoist our 5th Lombardi Trophy right in America’s eyeball.

BREAKING NEWS UPDATE - A very credible anonymous source in line for coffee today said Brady would not be suspended!