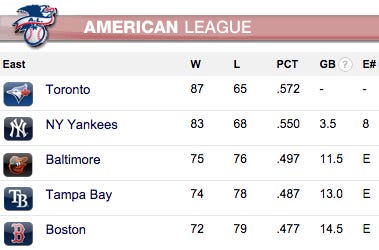 TORONTO — When Russell Martin swung and belted a no-doubt-about-it drive into the left-field seats, the baseball was not the only thing to which the Yankees could wave goodbye.

Gone, too — in all likelihood — are their division-title hopes after Martin’s three-run, seventh-inning homer delivered the crowning blow in theToronto Blue Jays’ 4-0 win Wednesday, which put them three and a half games ahead of the Yankees with 11 days remaining in the regular season.

Last night was the nail in the coffin for the Yankees AL East hopes. I think we all were hoping that they would win last night and turn things around for Yogi Berra on our road to another World Series championship but it’s time to be realistic about who this team is. This is a team that is going to have to win a 1 game playoff on the way to championship #28.

Now the  Wild Card isn’t wrapped up yet, but with Houston slipping, it should not be hard to get things wrapped up over the next few days and secure home field for the play in game. While it seems like these games won’t really matter and we should use the opportunity to rest some guys, these games are actually very important for 3 reasons.

1) Who are our starters? Over the next 11 days, Joe Girardi has to come up with a contingency plan if Tanaka doesn’t come back healthy enough and needs to plan beyond the 1 game for a possible ALDS series. How do Pineda, CC and Severino line up behind Tanaka if Tanaka is even there for the playoffs? The next few days will determine that, but it is a key to the next 11 games.

2) What is our lineup? Some of our guys are ice cold and maybe a day or 2 off will get them right, but maybe they need to play though the slump and hit their way out. Figuring out how to get the top of the lineup going and what is going on with Headley is going the be huge over the next 11 days and if Headley can’t figure it out, do we see ARod get some reps? I don’t want to plan too far ahead but if the Yankees do make a run, are we going to sit our most consistent bat in the NL park? It’s a long way away but it’s something Joe needs to think about.

3) Who is our future? Bird has been thrown into the fire here, but there are a lot of guys on that bench who are supposed to be a part of this team for years to come but aren’t getting the shot in a pennant race. This should be Refsnyder’s time to get some reps in and some extended playing time for Heathcott. They won’t factor into the playoffs and may not have huge roles next year, but getting the experience and showcasing them for potential trades is a key to the organizations future.

With the East race over and the Wild Card almost wrapped up, just enjoy the rest of the season. Big Cat used the example of enjoying the last bites of your sandwich for football every year but as baseball fan’s we’re in the same boat. With just a handful of home games left, get out to the stadium because you might not have the chance again until April.

KFC Editor’s Note: Oh how the mighty have fallen.