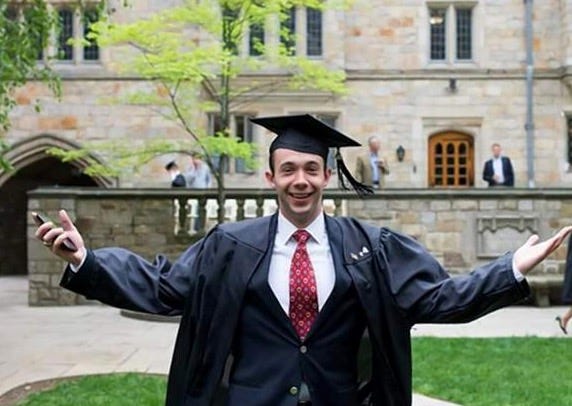 Tyler Carlisle and Alexander Michaud, both 21, were having sex with a female student — who has not been publicly named — when Carlisle grabbed a knife and plunged it into his long-time friend’s throat, according to the New Haven police report obtained by Gawker.

The shocking new details, obtained through Connecticut’s Freedom of Information Act, are the first to shed light on a motive behind the senseless tragedy which left Carlisle dead and Michaud suffering a critical stab wound.

Both men — who were from Manchester, N.H., and members of Yale’s conservative campus group Party of the Right, according to the student-run newspaper — were in an off-campus apartment on May 26 with the female student when things turned violent.

Carlisle, who recently graduated after studying philosophy, is said to have become “jealous” of Michaud and consequently grabbed a knife off a nearby nightstand before wounding Michaud in his upper throat.

I met and spoke with Michaud at 20 York Street and he stated the following:

Michaud, [redacted], and Carlisle had all been drinking. The three of them were having sex in the bedroom, and Carlisle started to get jealous of Michaud and [redacted]. Carlisle grabbed a knife that was on the nightstand next to the bed. Carlisle stabbed Michaud in the neck area. Michaud does not remember how he got to the living room. Michaud sat on the chair in the living room and told [redacted] to call “911.” [Redacted] grabbed a white t-shirt and held it to Michaud’s neck to stop the bleeding. Carlisle then went to the living room and started pacing back and forth, saying “I’m sorry.” Carlisle sat on the window sill and said he was going to jump. Michaud did not see Carlisle jump out of the window. [Gawker]

Upon arrival, Officers Hwang, Lavache, and I approached [apartment number redacted] and heard a woman screaming, “in here” and the apartment door was open. As we entered the apartment, we saw the victim, later identified as Alexander Michaud, sitting in a chair, naked, in the living room covered in blood. A female, later identified as [name redacted], who was also naked, was holding a white t-shirt to Michaud’s neck attempting to apply pressure. We were informed by [the female undergraduate] that the offender, Tyler Carlisle, jumped out of the window prior to our arrival.

AMR medics arrived shortly after our arrival. They assisted Michaud on scene, then transported him to Yale-New Haven Hospital Emergency Room at 20 York Street. Michaud was treated for a single puncture wound to the left upper neck area, and was declared in stable condition by medical personnel.