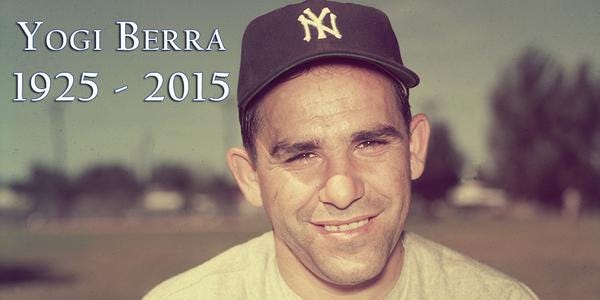 Yahoo – New York Yankees icon, and Hall of Fame catcher, Yogi Berra has died at the age of 90 late Tuesday night. The Yogi Berra Museum was first to break the news, which was confirmed by MLB.

On the field, Berra was regarded as one of the greatest catchers of all time. Over his 19-year playing career, Berra hit .285/.348/.482, with 358 home runs. He made 15 straight All-Star games and won three MVP awards during his 18 seasons with the Yankees.

Berra appeared in 14 World Series as a player, winning 10 of them. Both of those figures are a major-league record. He was elected into the Hall of Fame in 1972. The Yankees also retired Berra’s No. 8 that same year.

This is a tough one for all Yankee fans for a few different reasons. Most people don’t stumble into being a Yankee fan, it’s something that is passed down from generation to generation. Part of that process is an education on the history of the team and why your family or whoever is passing this down to you, is a Yankee fan. Yogi Berra is always a big part of that story for anyone growing up in a Yankee house.

Berra didn’t look like a stud MLB player and at first was passed over by teams in favor of his best friend growing up, Joe Garagiola because he didn’t seem like an MLB caliber prospect. He turned that rejection into a contract with the Yankees, where he went on to win 10 World Series as a player while appearing in 14 of them. Yes, it was a different league then with less teams and less talent but 10 WORLD SERIES wins is insane to think about. Not only was he on these teams, but he wasn’t some Robert Horry who just happened to be there, he won the MVP 3 times.

After his playing career Berra went on to Manager both the Yankees and Mets, winning 3 more World Series rings and having one of the all time disputes with George Steinbrenner that kept him away from the team for 14 years. I still remember in 1999 when Yogi came back to the team and I didn’t get the significance of this old man coming back. How it would help a team that already had a guy like Derek Jeter? What else could they need? But that’s when I realized that for our parents, Yogi Berra was Derek Jeter. He wasn’t dating models and he gave more to the media, so off the field they were very different. B when you look at the accomplishments and the longevity with the team, they are very similar in what they mean to different generations of fans. So whoever made you a Yankee fan, probably needs a call today, the same way you will one day when Derek Jeter doesn’t live forever.

For every Old Timers Day, Yogi was the last Yankee to come onto the field, because he has been the representation of a time when the Yankees didn’t lose. A time that manufactured all of the cockiness, we as fans, have everyday and showcase by claiming our 27 championships. But now with Yogi gone, we wont have those moments. We only have the memories of seeing him and hearing his one liners while the team tries to go get number 28 for number 8. Rest in Peace Yogi.

Warning: If you click play, its going to get dusty.