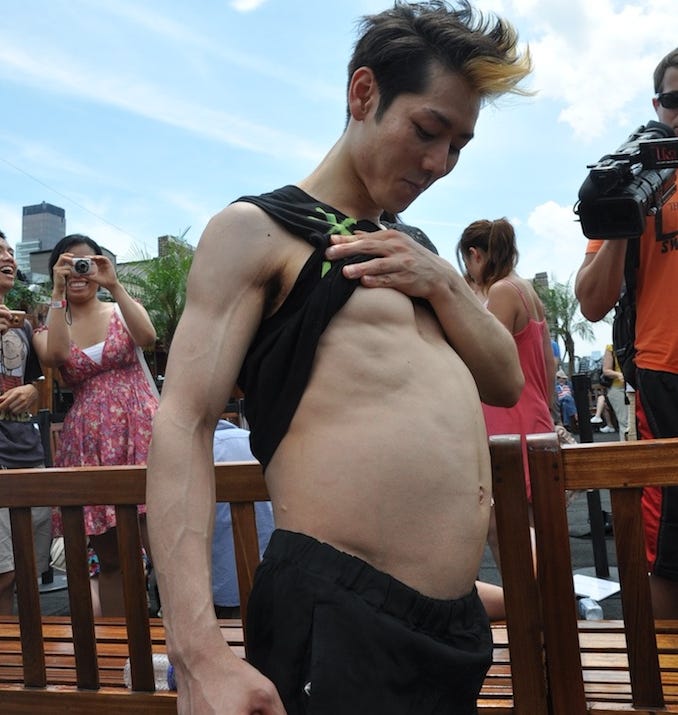 LINCOLN SQUARE — How do you break the Cubs “Billy Goat” curse? You eat the goat. Takeru Kobayashi, a six-time Nathan’s Hot Dog champ, and L.A. Beast, who once consumed an entire watermelon including the rind, are joining forces with Taco In A Bag‘s Pat Bertoletti and Tim Brown in a bid to devour a 40-pound goat — cooked, just so we’re clear here — in a single sitting. Catch the feeding frenzy, if you can stomach it, at 7:30 p.m., Tuesday, at Taco In A Bag, 4603 N. Lincoln Ave. Brown, who dreamed up the challenge on Monday, predicts it won’t take much more than five minutes for the four to gnaw their way through the entire carcass.

I’m starting to feel bad for the rest of Major League Baseball. First the Cubs are actually good, best record in baseball since July 29th, second Yadi is dead, and now third Kobayashi is coming to Lincoln Square to eat an entire Goat and break the curse. Now I’ll be honest with you, I’m not a big curse guy, I think the Cubs lack of Championships probably has a lot more to do with fielding some really shitty teams over the years mixed with a couple of unlucky bounces, but what I am for is stunts to break curses. That’s counterintuitive yes but it’s the truth. Better safe than sorry, and if the Billy Goat curse is real I can’t think of a better way to break it than with that random Japanese guy who eats a lot of hot dogs. He was basically born to break a baseball curse in Chicago, IL.

This gave me chills. Nothing in this world like meaningful baseball when the seasons change.