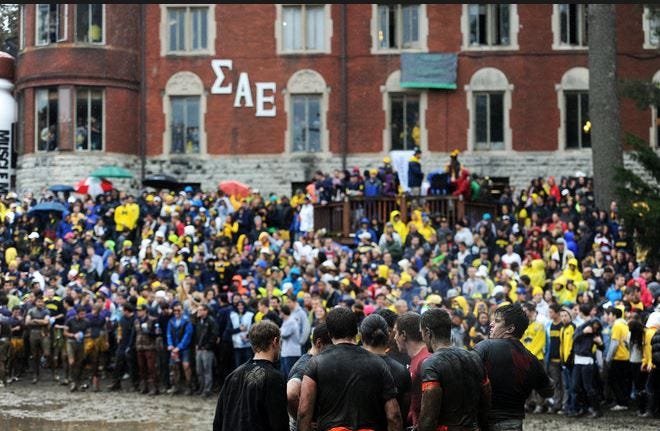 Mlive – For 81 years, the Mud Bowl has been a tradition of the University of Michigan’s Sigma Alpha Epsilon fraternity, but that annual event is in serious jeopardy now because earlier this summer the chapter had its charter revoked by its national organization. Brandon Weghorst, the associate executive director of communications for the national organization, said SAE headquarters closed its U-M chapter this summer because of “health-and-safety violations and the failure of members to uphold the stringent policies and procedures outlined by the national organization.” The closure means that the students, now former members of the fraternity, don’t have the authority to host any annual events that are associated with the organization, including the historic Mud Bowl game which is usually held in conjunction with homecoming weekend. “Our leadership has zero tolerance for actions and behaviors that (don’t) live up to our values and morals,” Weghorst said in an email to The Ann Arbor News. Weghorst added: “The closure is unfortunate, but we hope to re-establish the chapter again at some point in the future with students who serve as gentlemen, leaders and role models.”

You know who the only people worse than school administrators are? National executives at frats and sororities. Nobody takes themselves more seriously than they do. They live in this world where they think Greek Life is about creating upstanding gentleman, leaders and role models and not about partying, fucking, and general college mayhem. It’s the biggest crock of shit going. If you can’t party Greek Life wouldn’t exist. It’s like pretending big time D1 athletes go to school to get an education. Give me a fucking break. One of the reasons you join SAE at Michigan is for the damn Mud Bowl. Thing has been going on for 81 years. It raises a ton of cash for charity. I don’t give a fuck what the National chapter says. Fuck them. You do the mudbowl and you do it big right in their faces. Don’t lets the suits at corporate steal your college fun.

PS – How long till Harbaugh overturns this ruling? The Mudbowl is as much a part of Michigan as Bo Schembechler is and Harbaugh doesn’t let Michigan Tradition get fucked with. He already overturned the school decision to ban the movie “American Sniper”. Nobody is more powerful than him. I guarantee you he fixes this shit.