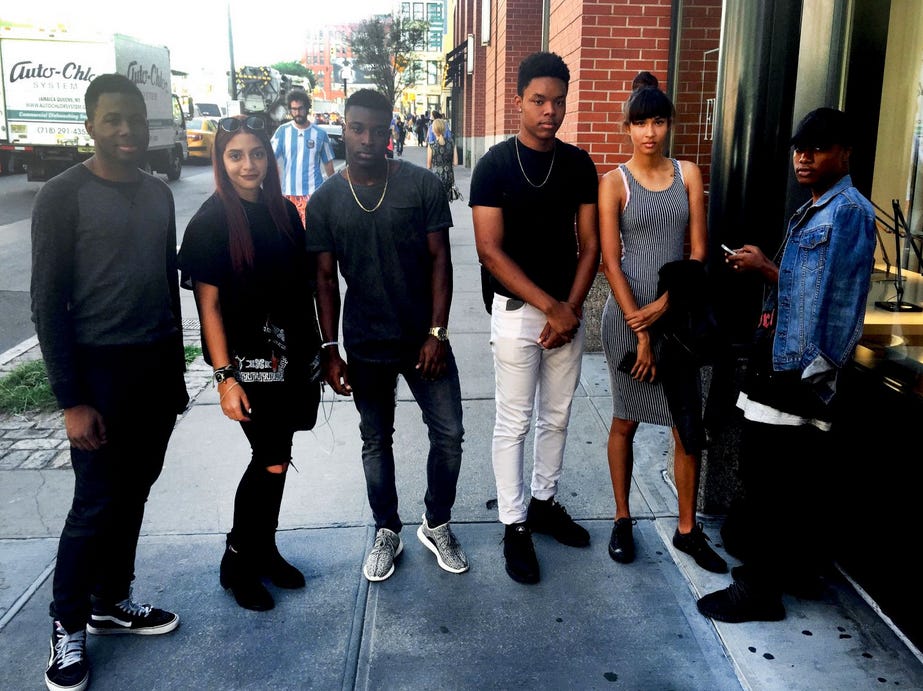 Sole Collector - It’s the second to last day of New York Fashion Week. Kanye West just premiered his second consecutive collection through adidas, not only in New York, but in movie theaters throughout the country.  Moments after West takes his final bow at the Skylight Modern studio, a dedicated throng of of adolescents steadily gather in front of Kanye West’s Soho New York apartment building.  Call them fanboys. Call them stalkers. Call them followers. They’re shirking school, work, and other responsibilities in hopes of just touching the hem of Yeezus’ garment.

What are you guys hoping to get out of being out here today?

Delana, 19: I’m not gonna lie. I’m actually out here trying to get noticed.I want to take a picture too, everybody’s gonna hate me because of that.

Ashley, 16: I’ve never actually got to meet him in person and I really like him. I think seeing him in person will, like, fulfill my dream, you know? Not my dream but like my thought of him. People always try to portray him as a mean person but I just want to see if he’s really chill and everything.

Harry,19: Same as Ashley. I’m just out here and I want to finally meet Kanye. I got to see him in concert, but it’s not enough. I need to see him in person to know who he is genuinely as a person.

Joshua,18: I’ve met him before too and he’s a really cool person. Like the first time I got to take a picture with him but that was really it. This time I feel like I could have a real conversation. Last time it was just like. “Thanks for the Yeezys. I love you. When are you dropping your next album?” But this time, I think it will be a more real conversation.

You all just got here to the building a few minutes ago, but have you lined up outside of here before?

Delana: Yes. Three days ago I was out here for about an hour and a half.

Corey: The longest I’ve waited was like eight hours. Maybe eight or nine hours. Just waiting for an autograph and everything to just talk with him.

Joshua: All day ni**a [laughter]. Last night we were out here but he never came out. Today we went to the Yeezy Season 2 screening in Union Square and then just headed over here.

Ashley: This is like my first time out here trying to stalk him.

How often do you all come out here?

Corey: This is my fourth time.

Joshua: Everyday. Honestly, I work down the block so every time I finish work I just pass by and see who is here and if there’s any paparazzi. If there is, I’ll stick around.

Harry: Whenever I’m in SoHo I try to pass by.

Boy do I fucking hate these kids. Only thing worse than President Elect Kanye West is the throngs of idiot teenagers stalking him outside his apartment. There is really not a single person I’d ever consider doing this for. Because not only is it ridiculous to spend hours and hours just for the chance to see someone or get them to write their name for you, but the person who you idolize so much undoubtedly hates you for doing this. So really whats the point? You like like an asshole all day long and then the person who you love thinks youre an asshole for being weird and stalkerish. Well done.

I mean maybe I’d be excited for 2004 Kanye. Last Call Kanye. Spaceship Kanye. But new age weirdo hipster Mr. Kardashian West aint worth wasting a minute of your time waiting for. Unless of course you can get him to autograph your Yeezys in which case it is very very very much worth your time. Those little fuckers saying they wouldnt sell autographed Yeezys are the biggest liars in the WORLD.