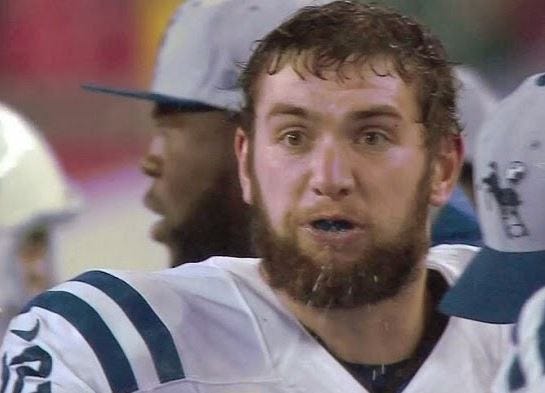 Listen I hate the Colts. Everybody knows that. There is no softer, crybaby, pussy franchise in sports. All they do is get punched in the mouth and then whine and moan and bitch that the Pats play too rough. But having said all that I don’t hate Andrew Luck.  I don’t picture him as a tattle tale. I feel like he was probably embarrassed by all the crying after the Pats stuffed them in a locker in the AFC title game. He generally owns up to the fact when he sucks. I don’t think he is a sniveling rat like the rest of the franchise. He always goes 200 mph trying to tackle a guy after he throws an INT. I’ve been on the record as saying I think he’s an excellent QB. But honestly at what point do we have to stop with the Andrew Luck hype machine? The dude throws 5 interceptions a game. I’ve never heard any QB hyped up as much who turns the ball over so much. Anytime the Colts play anybody good he is terrible. Yeah he can make all the throws. Yes he’ll make plays that dazzle you. But who gives a shit when you keep turning the ball over? It’s like that old Whitey Ford quote. I’m not a fan of guys who knock in 2 runs and let in 3. That’s Andrew Luck. For every great throw he has 2 back breakers. At some point you are what you are and right now Andrew Luck is one of the worst QB’s in football.

Andrew Luck in his last 9 games: