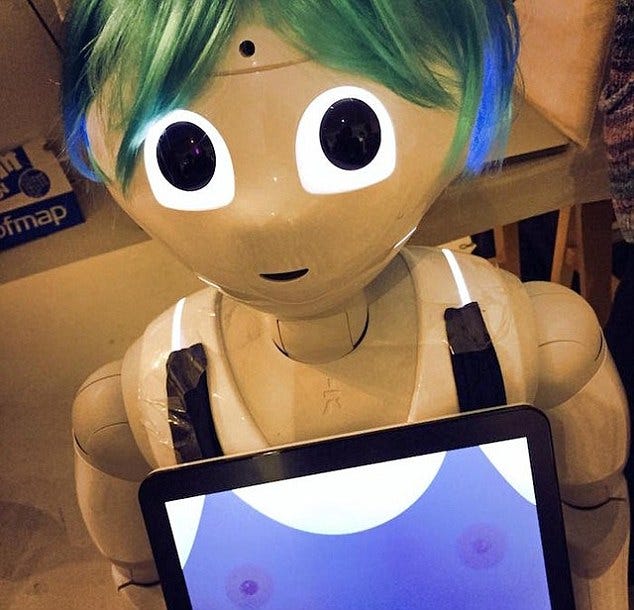 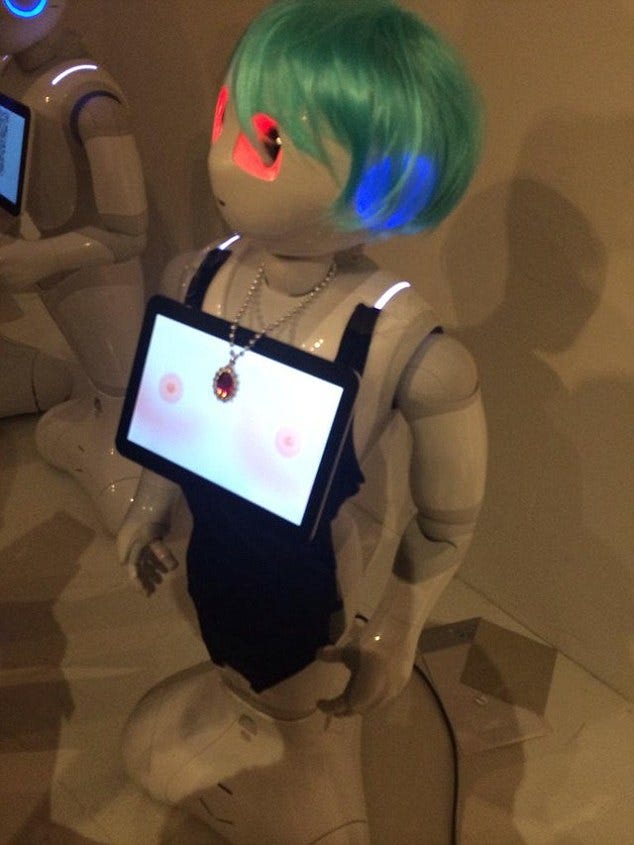 Daily Mail – The creators of Pepper the ‘emotional robot’ have forbidden users from ‘having sex’ with it, creating ‘sexy apps’ for it or reprogramming it to stalk people.  One thousand people paid £1,300 to buy the ‘companion bot’ within one minute of it going on sale in Japan this June, and then £250-a-month in rent. Japan-based SoftBank included a clause in the ownership contract which said using the robot for ‘the purpose of sexual or indecent behavior’ breaks this rental agreement. Disturbingly, computer pranksters have already reprogrammed the iPad hanging from its neck to give Pepper ‘virtual breasts’ which makes it shake its hips and moan when touched. It has reignited the debate around so-called ‘sexbots’, with one roboticist telling MailOnline that machines which humans can realistically fall in love with are only ‘years away’.  The revolutionary Pepper is designed to live alongside humans. It reads emotions, gives its owners advice and makes small talk. The super-advanced machine is so human-like that it can mimic human behaviour such as empathy, and even love. Its creators SoftBank have urged customers ‘not to develop any sexy, obscene, or violent apps or actions for Pepper’. Unfortunately the innocent Pepper has fallen into the hands of Japanese computer programmers who rewrote its software and created virtual breasts for the asexual robot. The female developer who created Peppai – a play on the bot’s name and the Japanese word ‘oopai’ for breasts – said it was ‘for the purposes of testing sexual harassment’. Some experts now say sex robots far more sensitive, attractive and ‘emphatic’ than Pepper – which humans could seemingly fall in love with – are just a few years away.

Listen not for nothing SoftBank, but this Pepper chick looks like a little fucking slut to me. If you dont want me to fuck a robot maybe dont make the robot a kinky little minx in a green wig? I dont care if she’s got a heartbeat or a socket for an electrical plug, a chick that looks like that is looking to fuck. Pepper is the one coming on to me, not the other way around. So thats on these guys making this robot into a sex kitten. Maybe make the robot like a fat chick? Maybe make the robot not have Fuck Me android eyes that you dont automatically envision looking up at you while she’s giving a blow job? And for fuck’s sake, dont release the robot in Japan. You could create a new type of wood chipper and Japanese people would try to stick their dicks in it. Its just what they do. They’ll try out anything with their dicks. You want to release a chaste robot that doesnt get fucked, release it in some lame country. Unveil that thing in like the Netherlands or something. I feel like the Dutch would respect your wishes and play chess with Pepper.

But the Japanese? Nope. Those guys will develop an app in 30 seconds that gives her nipples on her iPad hanging from her chest. Poor Pepper will be bukkakked by sundown.

PS – Maybe this is just the best reverse psychology marketing ever. I mean if  you make a Japanese robot you know they are gonna fuck it. So maybe they’re intentionally like “You are NOT allowed to fuck Pepper” just to make her like some sort of weird forbidden Japanese fruit. Could be brilliant.

PPS – Imagine renting a robot for $250, you fuck it, return it to the story and they can tell you fucked it and then you get fined? Like returning a rental car with a dent in it or something. “Sir, looks like you fucked Pepper and are in breach of contract. That will be a $250 fine.”