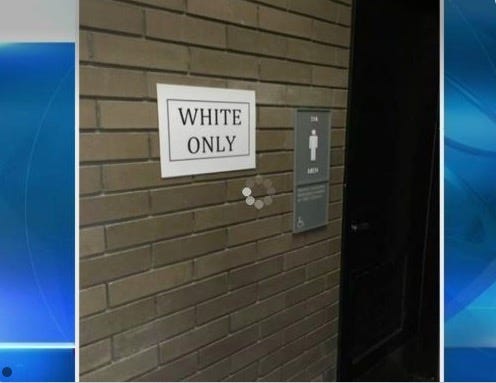 Buffalo – University at Buffalo campus police removed signs reading “White Only” and “Black Only” from Clemens Hall at the Amherst, N.Y. campus on Wednesday.

The signs, posted near a restroom and a water fountain, caused an uproar at the university, The Buffalo News reported. They were posted by Ashley Powell, a black graduate fine arts student, as part of an art project for a 400-level class titled “Instillation: Urban Space”.

Powell told a packed Wednesday night meeting of the Black Student Union that the goal was to send a message about privilege and accountability, according to WGRZ-TV. She apologized for offending people, but said the signs were meant to be artistic expression.

Some students at the meeting walked out in outrage, denouncing the signs as “racist” and even calling it “an act of terrorism.”

Oh man I love art so much. Art is kind of like the new “no offense” where you can do or say anything you want as long as you say no offense before it. “Oh those ‘Whites Only’ signs I hung up next to bathrooms and water fountains during the most racially tense time in recent American history caused an outrage? It’s just art. Please respect my artistic integrity.”

First of all the people calling this “an act of terrorism” should be immediately expelled. Not even joking, there’s no room on an academic college campus for people that dumb, it brings everybody else down. 9/11 was an act of terrorism. You getting offended by a sign on the wall is not terrorism. I don’t know if I need to go on with more examples, I really hope not. Also, not for nothing, but the girl that hung these up is black. Like she’s a black fine arts grad student. So I don’t know if the “racist” accusations work as well either.

“Offensive” is the word you are looking for. The signs are definitely offensive. Now it’s up to U Buffalo students to respond to being offended – you could use it to open up a campus dialogue about race, like the “artist” intended, or you could stage protests and hit up Twitter to call it a terror attack and probably sue. Looks like you went with the latter.

Either way I think the one thing we can all agree on is Ashley Powell’s art project final grade = F.