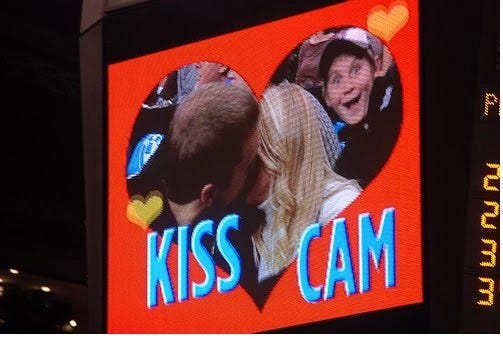 I’ve been meaning to write this letter all week after going to the Syracuse University-Wake Forest game last week, but your story on the Mets kiss cam inspired me to actually do it.

During the kiss cam break at the Syracuse game last weekend I saw some horrifying behavior that was met with cheers and applause from the crowd. It made me sick to my stomach.

The first two people (and probably most people that wind up on the kiss cam) were happy to oblige the camera. However, the cameraman then scanned into the student section where a young man and a young woman were shown. Clearly not a couple, the male student pleaded his case for a kiss on the big screen while the female adamantly shook her head no. So what does this guy do? He grabs her head and shoves his tongue down her throat, the crowd cheers.

The next “couple” shown were again students that were clearly not a couple. Again, this second female in question shakes her head no. I then see no less than six sets of hands from the seats around her shove her unwilling face into his, crowd cheers.

This is completely unacceptable behavior by the male students, the surrounding students and the crowd. It makes me sick that in a day and age where sexual assault (particularly on college campuses) is so rampant that school officials would allow such a display to happen.

The instances I witnessed at the game encourage and condone sexual assault and a sense of male entitlement, at best. And they are an actual instance of assault, at worst.

No one has the right to forcefully touch someone be it a hug, a kiss or a violent rape.

I adamantly insist that Syracuse University student government, the chancellor, the athletic director, etc. review what happened last weekend and seriously consider the ramifications of what they are encouraging.

Whether it was out of innocence or ignorance, it is still unacceptable to allow a student to be forcefully touched on a Jumbotron accompanied by cheers from the crowd. It’s disgusting.

I realllyyyyy hate going overboard with Pussification of America and College Sports stories and always try my hardest not to make a big deal out of things that don’t actually deserve it for the sake of a blog, but like…Syracuse just banned the Kiss Cam because of one person’s Letter to the Editor. One guy. All it took was one guy to type out a letter saying he was horribly offended by the Kiss Cam and boom, it’s gone*. Says the Kiss Cam “condones sexual assault” and represents “the sense of male entitlement at best, actual assault at worst.” Compares kissing during a camera gag to “a violent rape” all in the same sentence. Again not to be dramatic but I think I can say with a straight face and clear conscience that we are officially at DEFCON 1 with fake outrage.

*Bear in mind not a single person has corroborated that any of this actually happened, and that the article on Syracuse.com has over 330 comments, many of which are from people who were at the game, watched the Kiss Cam, and didn’t see any of this happen.

No word yet on if Steve has pressed formal charges on President Jimmy Carter for sexual battery.

Will keep you posted.